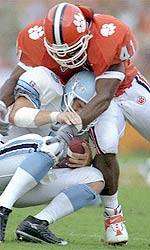 Thomas To Start For Tigers Saturday

Clemson, SC – Clemson defensive coordinator Reggie Herring said Wednesday after practice that junior linebacker Rodney Thomas would start at strongside linebacker in place of Braxton K. Williams this Saturday when the Tigers faced Wofford at Death Valley. It will be the first start of Thomas’s career.

Herring said that Williams, a senior, will serve as the backup at the strongside position. Chad Carson will remain the starter at the weakside linebacker position and John Leake will continue to start at the star safety position.

Herring also said that freshman Leroy Hill would be the backup to Carson at the weakside linebacker position. He also said that he was making no commitment to this lineup change past this week’s game. “Rodney Thomas has demonstrated that he is better in run support and Wofford is a running team,” said Herring, who again will coach the Clemson defense from the pressbox as he recovers from a torn Achilles tendon injury.

Herring also said that cornerback Kevin Johnson is recovering from a bruised shoulder but he is not certain if he will start on Saturday. If he can’t red-shirt freshman Ryan Hemby will start in his place.