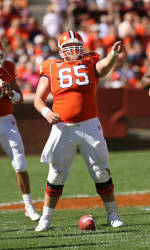 Sophomore center Thomas Austin was recently named Offensive Lineman of the Week by the Atlantic Coast Conference. Austin played in 85 snaps in Saturday’s matchup against in-state rival South Carolina, grading out at 87 percent. In the 23-21 win at Columbia, S.C., the Camden, SC native recorded eight knockdown blocks, paving the way for running backs James Davis and C.J. Spiller to gain more than 200 combined yards on the ground.

Other ACC Players of the Week:

OFFENSIVE BACK–Matt Ryan, Boston College, Quarterback, 6-5, 220, Sr., Exton, Pa. In BC’s final regular season game of 2007 against Miami on Saturday, quarterback Matt Ryan had one of his best days of the year, completing 26-of-43 passes for 369 yards and three touchdowns. After the Hurricanes tied the game at 14 with a fourth-quarter touchdown, Ryan took control of the game, leading the Eagles to two late scores to give them the team its 10th win. With the three touchdowns, Ryan now has 53 for his career, good for third in school history.

DEFENSIVE LINEMAN–Mark Paschal, North Carolina, Linebacker, 6-0, 230, Jr., Charlotte, N.C. In just his third start of the season against Duke on Saturday, Paschal registered a career-high 17 tackles as the Tar Heels defeated the Blue Devils 20-14 in overtime. In all, Paschal had nine solo stops to go along with 2.5 tackles for loss and one pass breakup as the North Carolina defense held the Blue Devil rushing attack to 3.0 yards per carry and zero points in the overtime period.

DEFENSIVE BACK–Alphonso Smith, Wake Forest, Cornerback, 5-9, 191, R-Jr., Pahokee, Fla. Against Vanderbilt on Saturday, Smith recorded two interceptions, bringing his season total to eight, as the Demon Deacons defeated the Commodores for their eighth win of the season. He also contributed five tackles, one sack and one forced fumble in the 31-17 victory. With eight interceptions this year, Smith is the all-time single-season leader at Wake Forest.

SPECIALIST–Gary Cismesia, Florida State, Placekicker, 5-11, 205, Sr., Parrish, Fla. With four field goals against Florida on Saturday, Cismesia tied the school and ACC record for field goals in a season. For his record-tying 27th field goal, Cismesia split the uprights from 60 yards out with no time remaining on the clock in the first half. The 60-yarder marks the longest field goal ever made by an ACC player. Cismesia is now 27-for-33 this season, and ranks second in the league in scoring with an average of 8.8 points per game.

ROOKIE–Josh Adams, Wake Forest, Running Back, 6-0, 180, R-Fr., Cary, N.C. In the Deacons’ 31-17 win over Vanderbilt on Saturday, Adams broke the 100-yard mark for the third time this season. For the game, he totaled 111 yards on 24 carries with two touchdowns. Adams currently ranks third in the league in rushing with an average of 80.6 yards per game, and is tied for fourth with 11 touchdowns during the season.