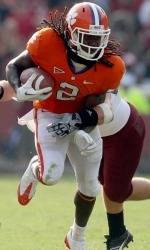 GREENSBORO, NC – A freshman stepping into a high-level college football program can usually expect one of three things: (1) a redshirt season; (2) playing on special teams; (3) a backup role with a chance to eventually work his way up as a starter.

There are always a few exceptions, and it didn’t take long for Sammy Watkins to prove he was one of those.

The wide receiver burst on the scene at Clemson, making a major impact in all three of the Tigers’ wins by catching 21 passes for 292 yards and four touchdowns. Last weekend he torched Auburn for 10 catches, 155 yards and two scores to help end the 17-game winning streak of the 2010 national champion.

That performance was really no surprise to Clemson coach Dabo Swinney, who said Watkins is just doing in games what he has been doing in practice since the start of preseason camp.

Click here to read the complete article on theACC.com.