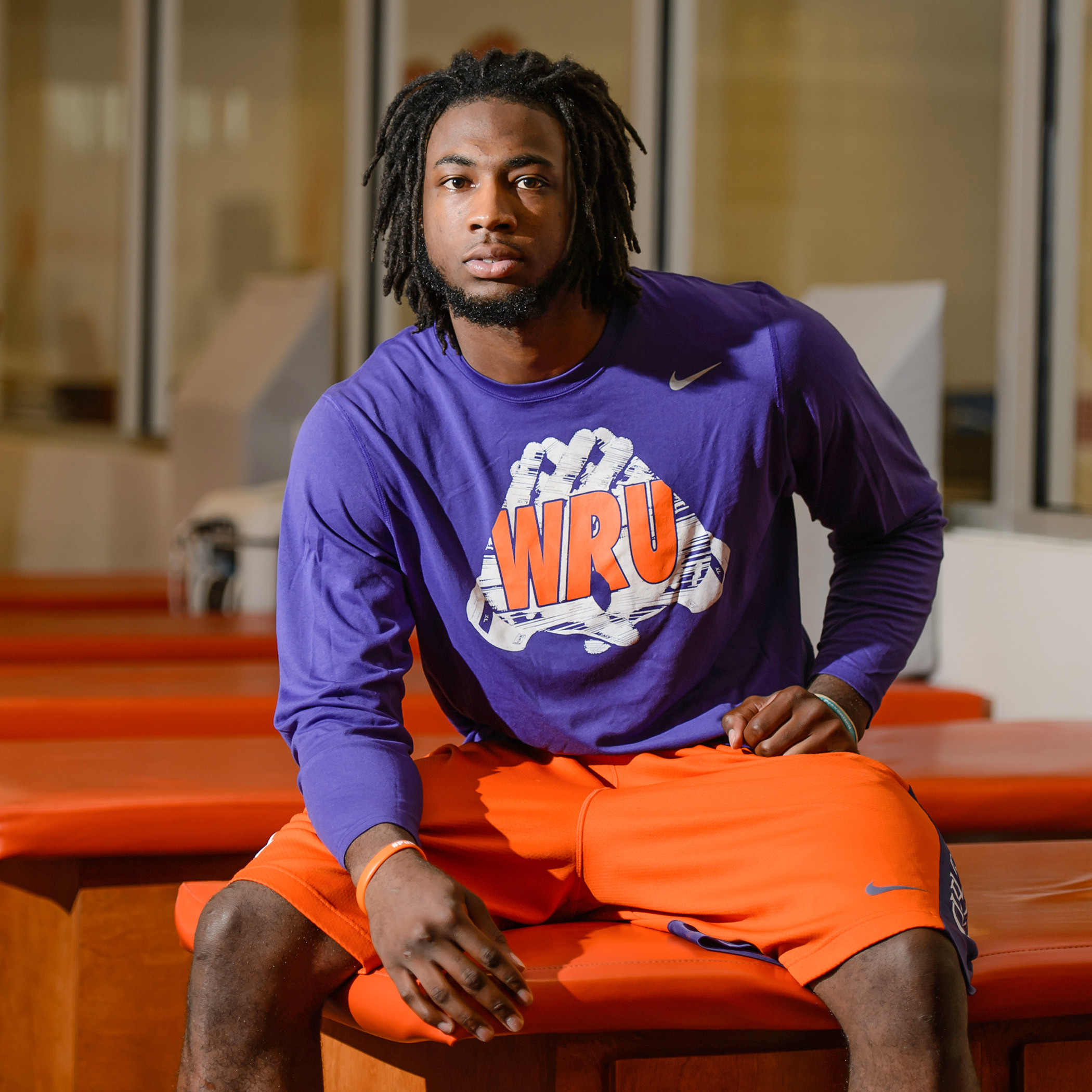 The Return of Mike Williams

It was Saturday, Sept. 5, 2015 in Clemson, S.C. The Tiger football team had taken the field for the first time. The opponent was Wofford. Kickoff was half past noon.

With 11:07 left in the first quarter, Deshaun Watson completed a pass in the endzone to junior wide receiver Mike Williams. The ball floated in the air as Williams caught the ball and successfully tapped one foot on green grass.

The Tigers had scored on their first drive of 2015. Watson, a preseason Heisman Trophy hopeful, had completed a season-opening touchdown pass to Williams, his favorite target and a preseason All-America candidate. All seemed right in Tigertown.

“I saw the route was open and I knew it was going to be a touchdown,” explained Williams. “So I ran the route, caught the ball and everything was going good. My main focus was getting my feet down, and then I got pushed.”

However, following the catch, Williams was pushed to his left, and his momentum caused him to collide with the goalpost and immediately fall to the ground. Seconds passed and then minutes in which Williams did not get up and rise to his feet. Teammates, coaches and athletic training personnel rushed to his side.

A quiet fell over the crowd inside Memorial Stadium, the kind of quiet that no player, coach or fan wants to hear on a Saturday in September. It was a silence that no gameday stadium atmosphere should ever have to endure.

Williams was then lifted onto a stretcher and carted off the field. His mind raced as he thought about the possible repercussions of what just occurred. His tearful mother waited for him in the tunnel and was with him as he was transferred to nearby Oconee Medical Center for further medical evaluation.

After extensive x-rays, doctors concluded that Williams had suffered a small fracture in a bone in his neck. The good news, he was going to be able to play football again. The bad news, no more football in the immediate future, and just like that, Williams’ 2015 season was over.

His final 2015 stat line: one game, one start, two catches and one touchdown. Not exactly the contribution that Williams envisioned for his junior campaign.

“It killed me to not be able to play. After I got hurt, I was kind of sad. I really did not want to leave my house or do anything. Wearing the neck brace didn’t make it easier, because everyone could tell who I was in public.”

Injuries are a sobering reality of sports. They happen to almost every athlete and are, in most cases, unavoidable. Williams had practiced that route hundreds of times. He and Watson had connected on that pass in practice day after day. However, one collision can change a player’s trajectory for a whole season and simultaneously quiet a crowd of over 80,000 passionate fans.

Heading into the 2015 season, Williams had set numerous goals that he hoped to accomplish during his junior year. He wanted to follow the same path that so many Tiger wide receivers had walked before him. DeAndre Hopkins, Sammy Watkins and Martavis Bryant all had standout junior seasons and proceeded to enter the NFL draft after completing three seasons in a Clemson uniform. Williams looked up to and learned from all three of those Tiger greats and wanted to follow in their footsteps.

“One of the main reasons I chose Clemson was that I saw the success that Sammy (Watkins) and ‘Nuk’ (Hopkins) were having on the field at Clemson, and I believed that my game was similar to those guys.”

However, as Williams’ injury sidelined him for his entire junior campaign, he realized his path was going to look a little different than his predecessors.

“I had a lot of goals set for the 2015 season, and I ultimately wanted to take my talents to the NFL after the season ended, and then I got hurt. After the doctors told me I had a small fracture, I thought, ‘God has a plan for everything’.”

Despite not being able to contribute on the field by catching touchdowns, Williams found a way to make himself useful by becoming a makeshift coach on the sidelines. Numerous young receivers were required to play important snaps throughout the season as a result of Williams’ absence, and therefore the veteran wideout was needed to help out the many underclassmen on the field.

“On the sideline, I was very involved in our games. I was acting like a coach. I knew our offense and the plays, so I would tell the guys who were out there what I was seeing from the sidelines and how I thought they should attack the defense.”

Williams began to fill that mentor role for the younger receivers, as he helped them break down ACC defenses and advised them on how to run certain routes.

“I feel like I can help our younger receivers like Sammy (Watkins) and Martavis (Bryant) helped me.”

Williams’ season on the sidelines not only enabled him to become more of a leader for the Tigers, but it also afforded him a chance to gain some perspective regarding the game he loves.

“The main thing I learned during the 2015 season was that the game can be taken away from you at any moment. I could not be playing football right now, but thankfully, I still have the opportunity to play. I don’t take football for granted anymore.”

If Williams had not suffered a fracture in his neck in the first game of the 2015 season, he might not be on the Tiger roster this fall.

Williams’ goal prior to his junior season last year was to help lead Clemson to as many wins as possible, impress NFL scouts and get drafted after three years of college ball.

Now, entering his redshirt junior season, Williams still has that same NFL goal. However, he also has unfinished business here at Clemson. It is hard enough to be a member of a team that comes within five points of a national title. It is even harder to be injured during your team’s championship run and not be able to contribute on the field. Therefore, Williams cites one main goal for the Tigers this season.

“Our goal is the national championship, nothing less.”

Williams is poised to be a vital part of Clemson’s attempt to get back to the national title game, both on and off the field. As a sophomore in 2014, he played all 13 games, starting 11 and playing 749 snaps. He had 57 receptions for a team-high 1,030 yards, seventh most in school history and most ever by a Clemson sophomore.

Going into the 2015 season, Williams was a preseason All-ACC selection and was named to the Biletnikoff Award Watch List for the second straight year before he suffered his season-ending injury. If his most recent numbers and awards are any indication, Williams will be Watson’s go-to target in the 2016 campaign.

As much as Williams wanted to be like the decorated Tiger receivers that came before him and play three years at Clemson then hear his name called on the night of the NFL draft, he embraces the idea that he has created his own unique path.

If Williams declares for the NFL draft after the 2016 season, he will have one thing that no other Tiger wide receiver who left early for the professional ranks currently has, a Clemson degree. Williams is on track to graduate in December with a bachelor’s degree in sociology.

“I want to be the first person in my family to graduate from college and get my degree. I believe my degree will help me at the next level.”

Williams was a dominant college wide receiver before he suffered a season-ending injury on Sept. 5, 2015. His talent, ability and football IQ is still there, and his appreciation for the game and for his time at Clemson has increased.

When asked about the 2016 season, Williams summed up his aspirations in one sentence.

“I want to be the best receiver in the country.”