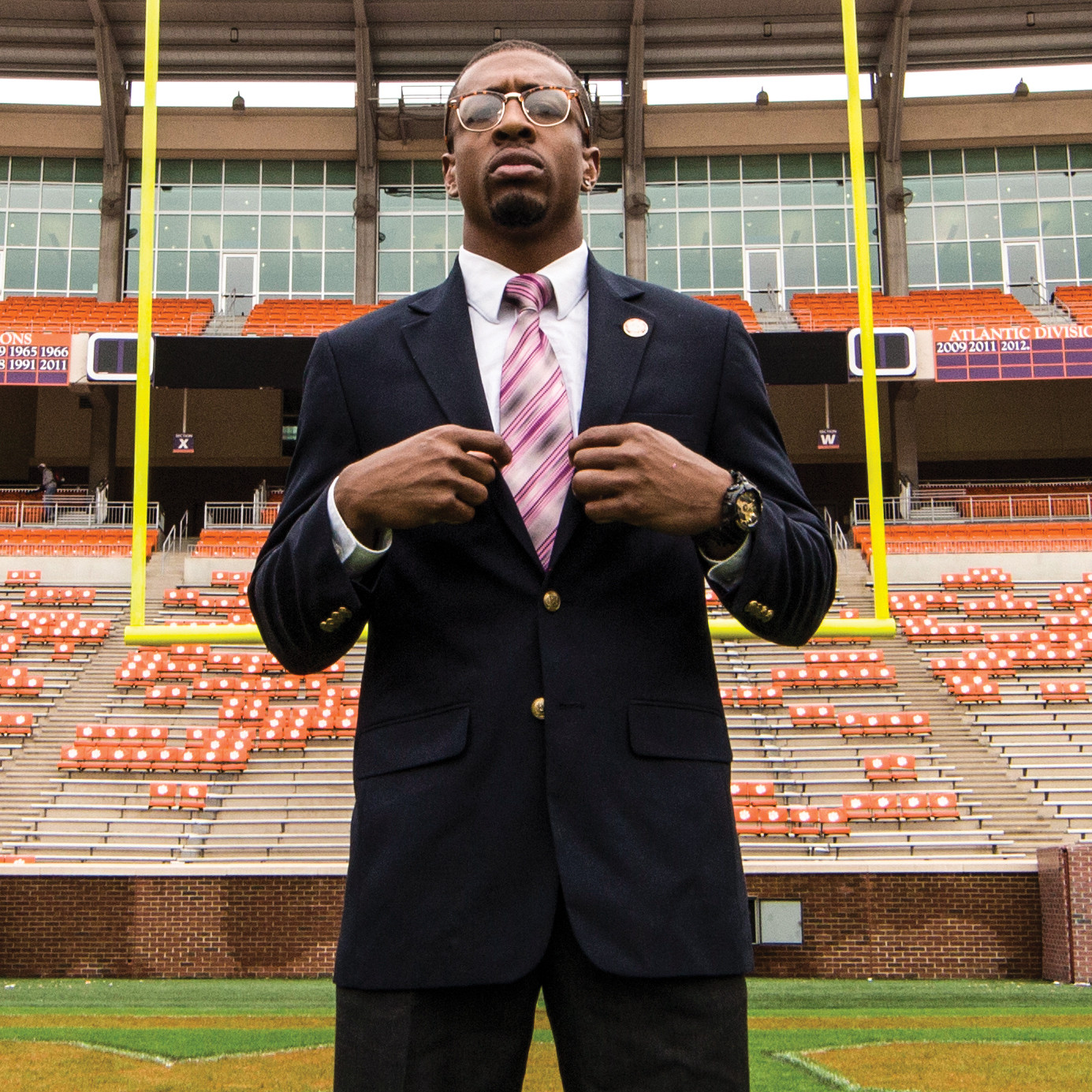 Former British Prime Minister Winston Churchill once stated, “Success is not final, failure is not fatal – it is the courage to continue that counts.”

For the Clemson Tigers, fifth-year senior cornerback Garry Peters stands 6’0”, 190 pounds and is the epitome of Churchill’s wise words and fighting mentality. Few members of the Tiger squad have been challenged time and time again like Peters, and few have met each challenge with as many successes.

To define the essence of Peters is to define toughness – physical, mental, uncoachable toughness – and it is paying off in a big way in 2014.

The story of Peters’ love affair with the game of football began over a decade ago, strangely enough on the hardwood in Conyers, Ga.

“I started playing when I was young, about six or seven,” said Peters. “My basketball coach at the time was also our football coach. He knew I was athletic and talked to me about suiting up to play football, too.

“Both my parents are from Jamaica and didn’t know much about the game, but after some convincing from my coach, they encouraged me to try out.

“For my first-ever football practice, I remember walking onto the football field all ready to go. My coach looked over at me and said, ‘Gary, in football we don’t walk onto the field…we run.’

“I didn’t like it at first. I made up my mind that I’d given football a chance and it was time to leave. However, my coach wound up telling my dad that I had quit playing. My dad had a talk with me about quitting, and that once committed I had better not give up on anything facing me.”

The lesson Peters’ father taught him stuck…don’t back down, quit or turn away from the challenges of life. What was once stubbornness in Peters soon gave way to a newly-discovered passion, and God-given talent, for the game of football.

“It was my seventh-grade year, my last year playing park ball, that I remember envisioning myself playing football for the rest of my life,” said Peters.

“I was doing really well as a running back, loving the team aspect of the game and enjoying every moment. One day the dream clicked for me. I knew I wanted to go out and make my dreams a reality. I knew I’d set the bar high so I could one day play collegiately, and ultimately in the NFL.”

In high school, Peters took a step closer to his dreams by catching the attention of most major Division I schools. A dangerous all-around athlete with blistering speed, Peters’ reputation as a lockdown cornerback was well known in recruiting circles.

When recruiting rankings were released, Peters was named a top-150 player by ESPN, the No. 20 cornerback in the nation by Rivals.com and the No. 10 athlete in the nation by ESPN.com. The mailbox at the Peters household was filled each day with new offers from coaches and programs across America.

“My recruitment process was so hectic in the beginning. I had offers from all over and wound up narrowing my list down to Clemson, Alabama, Florida State, South Carolina and Tennessee. It was a tough decision for me.

“My head coach, Chad Frazier, was a huge Clemson fan and my defensive backs coach was former Clemson All-American Terry Kinard. Those coaches loved Clemson and always spoke highly of the university and program.

“When I finally came to visit, I fell in love with this school as well. It felt like home. It’s been a perfect fit for me.”

And like his coaching mentor (Kinard), Peters has grown to be a perfect fit and dominant force in the Tiger secondary. Now a senior leader on the 2014 team, Peters has been putting on a star performance for the Tiger defense week-in and week-out this season. However, the path to the top was not always smooth for Peters.

“I think it’s natural when you get on campus as a freshman, you want to play and contribute instantly,” stated Peters. “I thought I was going to get here and see playing time right away. However, I needed to mature as a player and learn the system.

“I redshirted my freshman year, and although frustrating for me, it humbled me and instilled in me a desire to work even harder. When I finally got my opportunity, I was doing well, only to break my leg and face adversity again.

“I never gave up and I kept battling. I wouldn’t be the man I am today without the ups and downs these past few years, and I’m thankful I’ve been tested.”

The Clemson coaching staff is thankful, too. Simply put, when the going gets tough, Peters gets going. Time and time again, the cornerback has had the uncanny ability to make game-changing plays for the Tigers in their biggest contests.

In back-to-back bowl victories over No. 7 Louisiana State in the 2012 Chick-fil-A Bowl and No. 6 Ohio State in the 2014 Orange Bowl, Peters was the unsung hero whose gritty defense helped get the ball back in the hands of the offense when it mattered most.

“I get the most butterflies in the big games,” admitted Peters, flashing his trademark grin. “When you can feel that edge and electricity in the air, it motivates me and reminds me that I have to be on point.

“I like being the underdog, the guy who has nothing to lose. Whether the crowd is for you or against you, it’s something I feed off of. I live to prove people wrong.

“A challenge always brings out the best in me. I feel at the top of my game right now, but the big games bring out a little something extra in me.”

So far this season, Peters’s play gives credence to Venables’ compliments. He has 27 tackles (tied for sixth-most on the team), six tackles for loss, two sacks, four pass breakups and a caused fumble. He had two sacks in the win over Louisville, including a caused fumble that led directly to a score on the play.

In his final campaign, Peters looks to be relishing every snap, playing with a confidence and ease of a fifth-year senior. Although Peters has accomplished many of the career goals he set out to do as a freshman in the fall of 2010, a big one still remains…to play on football’s grandest stage in the NFL. Peters will graduate with a degree in sociology in May, and the future has never seemed brighter.

“I’m going to leave Clemson with a degree,” said Peters. “That’s huge for me. I came here to get a college education, and to leave with one is special. I feel like I can do anything with that degree in my hands.

“After I graduate, I’m going to work harder than ever before to make my dreams of playing in the NFL a reality. Whatever happens from there happens. Clemson has prepared me to be the best I can be on and off the field, and I have to trust that.

“Seeing the brothers I competed with and trained with every day leave this place and do well in the NFL motivates me to follow in their footsteps. I know I can do this at the next level. I’m ready to do whatever it takes.”

Winston Churchill would be proud.