When Hootie Ingram succeeded Frank Howard as head coach in 1970, he believed the program needed some changes to its image. Therefore, he set up a meeting with Sports Information Director Bob Bradley and other administrators.

One of the items on the agenda was the logo for athletics, which had been an image of a real Tiger or a block “C” for many years. The discussion went up the food chain and eventually reached the desk of President R.C. Edwards, who fully supported Clemson athletics to the point he actually ran down the Hill with the team prior to a game his last fall as president in 1978.

Edwards was good friends with Clemson graduate Jim Henderson, who had an advertising firm in Greenville, S.C., so he asked him to come up with some proposals.

Henderson delegated the design of a new logo for athletics to John Antonio, who had spent most of his career with the company working with corporations. He was a part of the team that came up with the United Airlines slogan, “Fly the friendly skies.”

Antonio started the project by contacting 32 different schools that had a tiger as their mascot.

“All of them had some drawing or picture of a live tiger,” said Antonio in an interview years ago.

Antonio wanted something that would make Clemson stand out.

One day, Antonio brainstormed an idea to create a logo in the image of a tiger’s foot. He contacted the Museum of Natural History in Chicago, Ill. and asked for a plaster-of-paris cast of the imprint of a tiger’s paw. 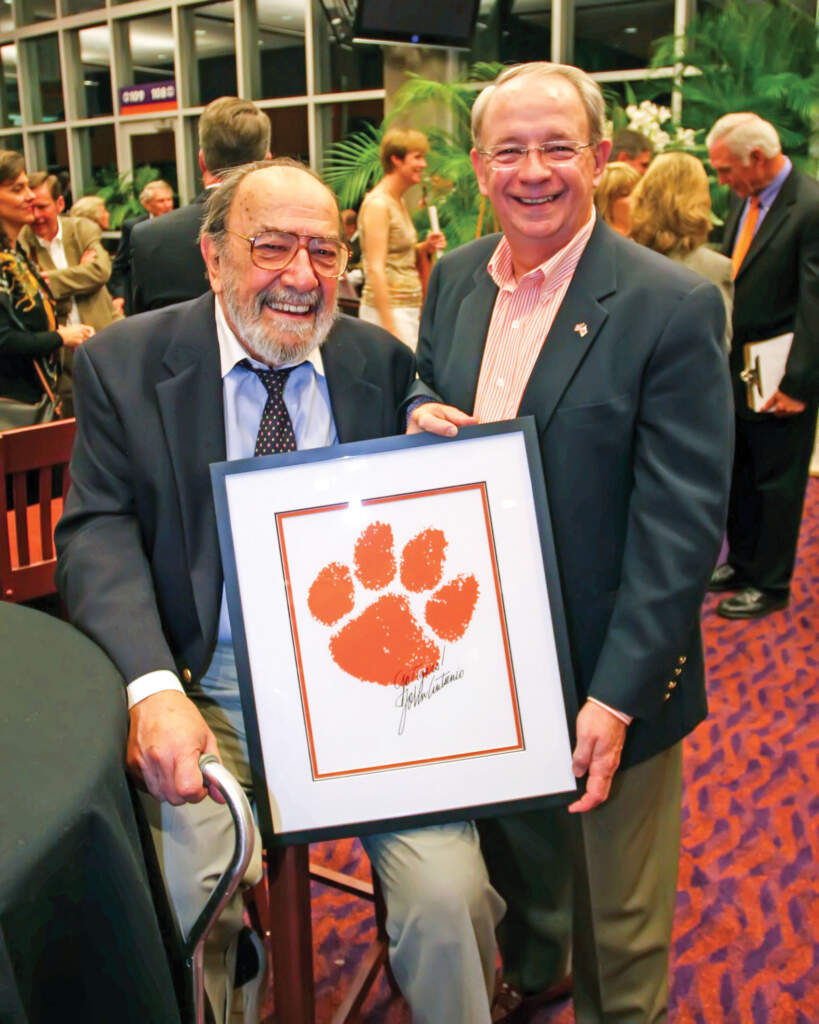 In June 1970, Henderson invited Clemson officials, including Howard, who was still the athletic director, to a meeting in which they would unveil this unique logo. Antonio brought some tangible uses of the paw to the meeting. He affixed it to blazers, schedule cards, a mock up of Death Valley with a tiger paw at midfield and made a similar picture of the floor of Littlejohn Coliseum.

There was tension in the room as Howard basically showed no reaction. However, that all changed when Antonio pulled out an orange Clemson helmet from under the table. He had affixed a white tiger paw to it. It was unusual in those times to have any logo on a college helmet.

“That helmet made a big impact on Coach Howard,” recalled Bradley years later. “He was so impressed that he wanted to bring that helmet back to Clemson and show everyone.”

It did not take long for the Tiger Paw to be approved by the Clemson administration, including Edwards.

Clemson unveiled the Tiger Paw on July 21, 1970 with a blitz of press conferences around the state (Florence, Charleston, Columbia and Greenville), plus trips to Charlotte and Atlanta. The caravan included new football Coach Hootie Ingram, new basketball Coach Tates Locke, All-ACC running back Ray Yauger and Wright Bryan, then the vice president for development. The group left Greenville-Spartanburg Airport at 7:15 a.m. and returned to Greenville for the final press conference of the day at 5 p.m.

Soon after its release, the Tiger Paw was everywhere. That included on all highways headed into Clemson.

It did not take long for the Tiger Paw to grow in popularity, especially among other schools with a feline mascot. Clemson did not copyright the logo for many years, because the theory was to get the “Paw” as much exposure as possible. It was not copyrighted until after the 1981 national championship season, when Clemson merchandising exploded.

This year, we celebrate 50 years of the Tiger Paw, as it is one of the most recognizable logos in the nation. It is synonymous with Clemson University and is a tangible source of pride for all Tiger fans.

“Last summer (after winning the 2018 national championship), I traveled to Europe and all over the United States,” said Head Coach Dabo Swinney. “Everywhere I went, I ran into people proudly wearing the Paw!”