The Last Word – The Story Of Ray Ray McElrathbey

Note: The following appears in the Charlotte gameday football program.

How many fans attending today’s game thought they had a chance to be in a Disney movie when the tickets came in the mail? That is the case today, as scenes from a movie about former Clemson cornerback Ray Ray McElrathbey will be filmed at halftime of tonight’s game against Charlotte. We encourage all of you to stay in your seats during halftime as plays are recreated from the 2006 season.

McElrathbey came to Clemson in August 2005 and redshirted that season. In the summer before the 2006 season, his 11-year-old brother, Fahmarr, came to Clemson to visit. That visit lasted a month. There were problems at home, as the boys’ mother had just moved back to Atlanta, Ga. from Las Vegas, Nev. and was fighting a drug-addiction problem.

Ray Ray had been down that road before and thought it would be best that Fahmarr not return to that environment, so he brought Fahmarr back to Clemson to live with him during training camp. Larry Williams, who was writing for The (Charleston) Post & Courier at the time and still covers Clemson football for TigerIllustrated.com, wrote the story of Ray Ray and Fahmarr leading up to the 2006 season. 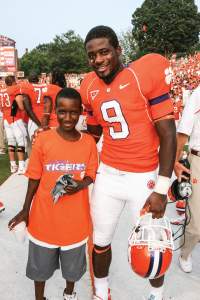 It became a national story as Clemson sought a waiver that allowed Ray Ray to receive help financially and in terms of rides that took Fahmarr to school while Ray Ray attended classes and practice.

In a landmark decision, the NCAA granted the waiver that allowed coaches and administrators’ wives to transport Fahmarr to school and to establish a trust fund that would help with Fahmarr’s daily needs.

By the end of the season, McElrathbey had become a household name in college football. Those were busy times for Ray Ray and me, as the coordination of interview requests for him were double those of Gaines Adams, James Davis, C.J. Spiller and any other player.

The Friday night before the Florida State game on Sept. 15, 2006, McElrathbey was named person-of-the-week by ABC World News Tonight. He was also the subject of a feature on The Oprah Winfrey Show and ESPN College GameDay, and articles were written in Sports Illustrated, The New York Times, The Denver Post and The Dallas Morning News among many more.

At the conclusion of the season, McElrathbey won the Keith Jackson Award of Excellence at the ESPN College Football Awards Show in Orlando, Fla. and received the Courage Award from Football Writers of America at the Orange Bowl.

I was first contacted about interest in doing a movie on Ray Ray and Fahmarr in 2007. It is finally coming to fruition, with an expected release date of next football season. 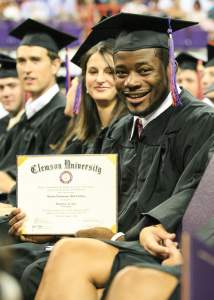 Production has already begun, with filming taking place in Atlanta and South Carolina. Tonight is a big night, as action shots from the 2006 season will be shot. In McElrathbey’s first game of the season (against Florida Atlantic) and first contest as a Tiger, he had three special teams tackles and was named Clemson’s special teams player-of-the-week by the coaching staff.

McElrathbey would go on to play every game that year as a special teams player and finished the season with six tackles, tied for sixth on the team.

The lasting memory I have from that season concerned how McElrathbey’s teammates and administrators rallied around him. It was another demonstration of the Clemson Family. The compliance officers worked tirelessly to get McElrathbey the NCAA waiver. The wives of the Clemson coaches and staff members provided rides after to school for Fahmarr after the NCAA waiver was approved.

McElrathbey’s teammates joined the cause as well. I remember talking with the late Adams, a unanimous first-team All-American that year. He took Fahmarr to get his school supplies in August and paid for them. That was a senior helping a freshman.

So stay in your seats at halftime today and cheer loudly when instructed.