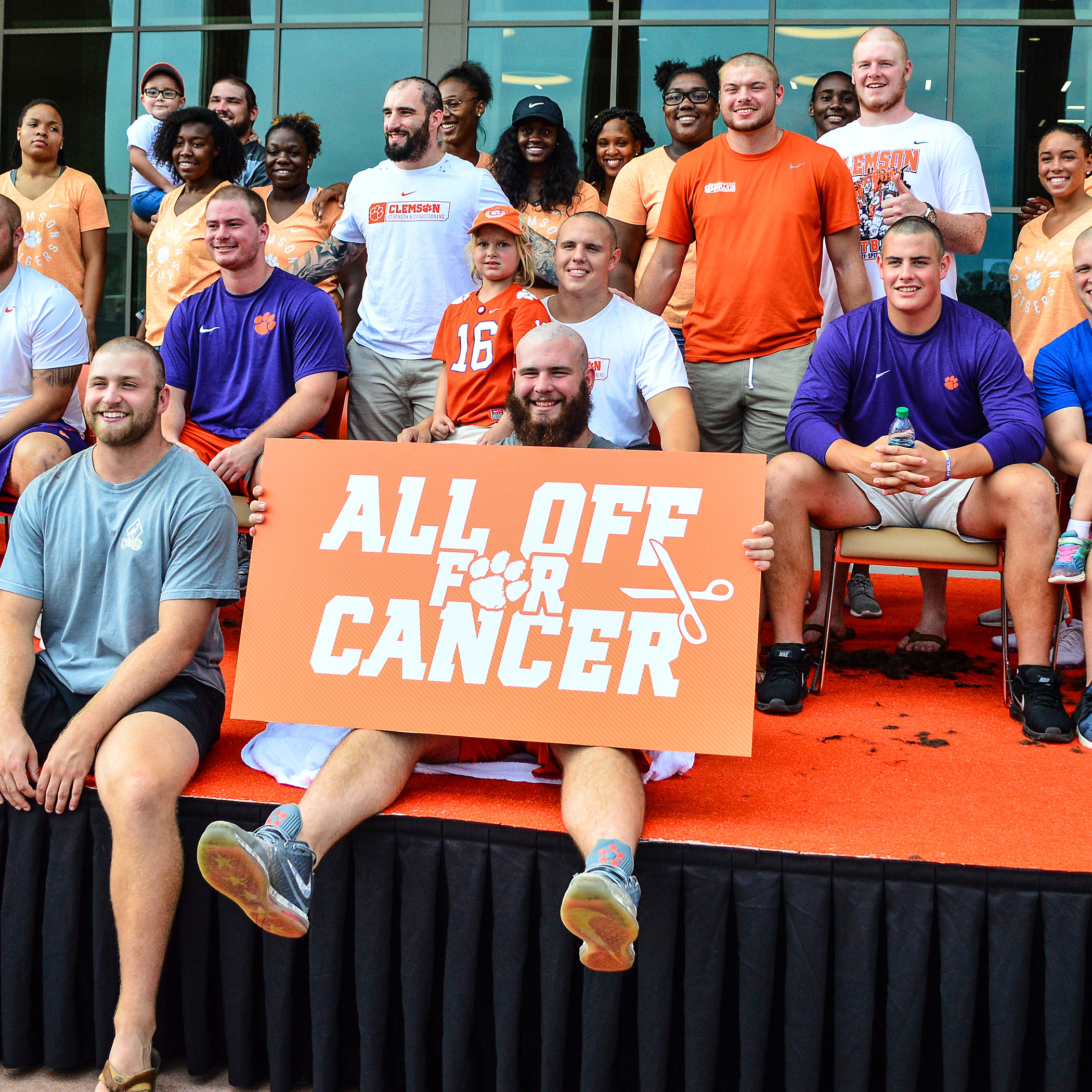 One of my favorite days of the 2017 football season took place on July 27.

That is not a typo.

But there was a gathering and a scheduled event that took place in the courtyard area of the Allen N. Reeves Football Complex.

It was a gathering of Tiger football players, Clemson women’s basketball players, coaches, administrators, some media and kids fighting cancer.

The event, named “All Off For Cancer,” was the concept of offensive lineman Sean Pollard, a sophomore from Jackson Springs, N.C., who cares about kids, especially kids fighting cancer. The event was for the benefit of Clements Kindness Fund for the Children, which raises money for pediatric cancer research and helps families who are fighting the disease with finances.

That afternoon, 14 Clemson football players had their heads shaved to bring awareness to the good done by the foundation. Many of their teammates were there to support.

“I went to the pediatric cancer unit in Greenville last year (by himself) and visited some of the kids,” said Pollard. “When I was there, I held it together. I played games with the kids, held them and had a great time.

“But on the drive back to Clemson, I couldn’t stop crying. I have a sister who is eight years old and I would do anything for her. To see these kids her age going through this had a strong effect on me.”

Soon after he got back to Clemson, Pollard went to see Jessie Carroll, then the player relations coordinator of P.A.W Journey who coordinated the community service activities for the Tiger football team.

After a few meetings, Pollard had Carroll sold on the idea of raising money for kids suffering from this terrible disease. Their initial goal was to raise $5,000.

So Pollard spread the word among his teammates and they showed up to have their heads shaved that July 27 afternoon. Many of them were holding children who had shaved heads as well.

One of the players who joined Pollard’s cause immediately was All-America placekicker Greg Huegel. He also helped recruit current Tigers to join the cause.

With the help of the Clemson women’s basketball team, who also wanted to be involved in Pollard’s event, the children actually did the shaving. There were some “mighty fine” looking Tigers by the end of the afternoon. Some players went from mohawks to crew cuts.

Sandra Miller is in charge of the Clement’s Kindness Fund for the Children, and she first met Pollard when she gave him a tour of the Greenville Children’s Hospital.

“Sean got down (on the ground) and played with them and was coloring with them and doing all sorts of things that made them smile and laugh,” said Miller. “It takes a special person to do that, and not everyone can do that.

“It gives us a lot of hope to see young people who have the same compassion and excitement to make a difference in the lives of these kids. It is so exciting to see someone like him want to help. It is awesome.”

With the help of Clemson’s social media group and the local media that cover Clemson football, word of the event reached the community. A week after the event, over $10,000 had been raised, double the initial goal.

Pollard plans to make this a yearly event.

“I still have two years after this season and I plan to do this before camp each year,” added Pollard. “We have a great platform through P.A.W. Journey, and we plan to use it to help these kids.”