The Last Word – Elements of a Winning Culture

I started my day on Oct. 10, the morning of the Tigers’ top-10 matchup with Miami (Fla.), by texting Dabo Swinney a note on his record in “rain games” as Clemson’s head coach.

The weather forecast called for steady rain during the game and I had been keeping a chart of his performance in rain games since he became the interim head coach in 2008. He had compiled a 9-1 record with a +13 turnover margin in those contests in inclement weather, with the only loss coming 11 years ago against a TCU team that finished the year with a 12-1 record.

At the end of the note, I texted that this note is one fact that says a lot about his culture. How many times have you heard Swinney say the following in an interview?

“It doesn’t matter what uniforms we wear, what television station we are on or what the weather is…our culture does not worry about those things.”

The Tigers did not worry about the weather that night either, beating the No. 7 Hurricanes by 25 points, and quite frankly, it was not that close.

More and more you hear pundits use the word “culture” when discussing a program’s relative success. It might be the most important aspect of Swinney’s program.

“The culture is the root of the tree,” he told me. “If you have good roots, you grow good fruit.”

Two of the elements of that culture are inclusion and appreciation.

“I have always thought it was important to have a culture of inclusion with everyone in the program. It is important to show an appreciation for those people, even to the bus drivers and the people who clean our building.”

Treating people with respect and showing appreciation obviously extends to the players and their relationship with each other. One of the best examples of that culture took place in the September win over The Citadel. Swinney called on Quinn Castner, a 5’5”, 140-pound walk-on, to a handle a kickoff.

“Quinn was just in his second month on the team and had not put one in the endzone in practice. I put the first kickoff (coverage) team out there, because I thought it would be returned.

“But he drilled it for a touchback. When he came to the sideline, the players went nuts.”

One player twice his size lifted Castner up in adoration. 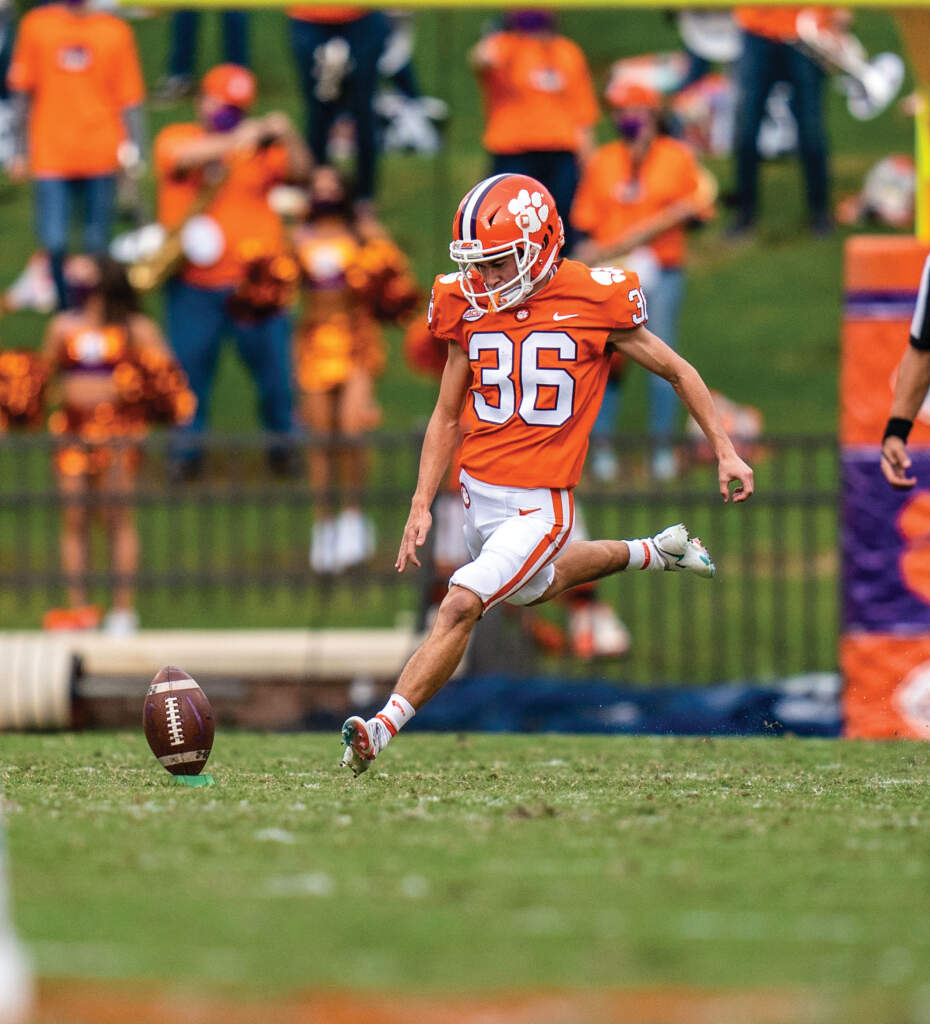 The creation of Swinney’s winning culture dates to his first press conference as interim head coach on Oct. 13, 2008. During that assembly, he talked about the concept of being “All In.” That might be the most important element of the culture.

“Being ‘All In” means giving your commitment to do the best you can in everything you do. You create that through a culture of empowerment, a culture of discipline and a culture of pursuing excellence. Doing common things in an uncommon way develops leadership.”

One of the elements of the culture’s foundation is the family atmosphere. Swinney has done that from day one by encouraging children of coaches to come to practice. Every Wednesday night during a season (in non-pandemic times), the team has a family staff dinner.

“I want our players to see that family atmosphere.”

Swinney’s communication structure within the program is also an important foundation. One of the first things he did in 2009 was to meet with the seniors and give them a voice. They helped him craft guidelines and the team commandments that are still used today.

Other important elements of the communications structure include Swinney Huddle, P.A.W. Journey and Swinney Council.

“Communication leads to trust and respect, and that has to be in place to have a sustaining culture.

“One of the most important things to communicate is the common purpose. Our purpose starts with graduation, includes giving our players tools to be successful in life and to win championships.”

Clemson, Duke and Northwestern are the only schools in the country in the top-10 percent in graduation success rate nine of the last 10 seasons. Along the way, Clemson has won six ACC championships, been to five College Football Playoffs and won two national titles.

The Clemson culture is one that is built from the inside out. It has an element of communication that leads to trust and respect, perhaps the two most important elements to fostering a sustaining culture.

The final element of creating a culture of success is repeating the process each year.

“You change the culture through graduation, recruiting, accountability and discipline.

“But you must repeat the process each year. You can’t carry over the awards and touchdowns to the next year. You have to re-install the culture each year, just like you re-install your offense and defense.”