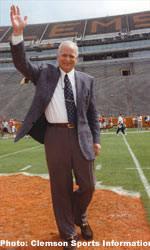 “I just closed my eyes and my mind traveled back 20 years. These were the same words I had heard 25 years ago from this great man. He was our coach, our leader.”

With those words, former Clemson All-American Joe Bostic took a crowd of more than 600 mourners on a journey. They were gathered at the First Baptist Church in Gadsden, AL for the funeral of former Clemson head football coach Charley Pell who had passed away on May 28, 2001. Those gathered were former teammates, coaches, players, and friends. They were all there because they loved this man and respected what he had brought to their lives.

Bostic was speaking of an electric moment last spring at Tigertown. Coach Pell was in Clemson for the annual spring football game and he knew his days were limited. Cancer was taking its toll. He had visited with his former players from the 1977 and 1978 teams on Friday night and now he was addressing Tommy Bowden’s current Tigers. Coach Pell, speaking in the soft tones left him by his draining strength, told the 2001 Tigers of what it means to be a team. He told them that each man must play his part, however large it may seem to be. He told them they must play together, they must play with one heartbeat.

Why don’t we do the same, let’s go back a few years! Charles Byron Pell came to Clemson in December of 1975. He had left the Virginia Tech program and was brought in to be Clemson’s defensive coordinator. He was the only change on coach Red Parker’s 1976 staff. He took the defensive assistants and laid out a summer game plan heading toward the opening of the 1976 season. Those defensive assistants saw a change immediately. Summer afternoons on the golf course were over. Coach Pell always said if you were a good golfer, you weren’t a good football coach.

The 1976 season was frustrating. Vince Fusco kicked a 57-yard field goal on the last play of the game for Duke to tie the Tigers at 18 all on homecoming. Too many penalties were crucial in a loss at Tennessee. Things jelled for the last game, however, a huge 28-9 win over South Carolina in the rain at Tigertown. However, it was not enough, and Parker was fired at season’s end.

The day was Dec. 1, 1977. Everyone involved knew there was a new sheriff in town and there was no doubt who was in charge. I was Bob Bradley’s assistant in the sports information office and we felt his impact. Things were gong to be done one way and one way only – the right way! Coach Pell made sure everyone was on the same page. As he used to say, we are going to move with one heartbeat.

The Pell approach paid dividends in the second game of the season when the Tigers upset defending SEC Champion Georgia, 7-6. Clemson had not won there since 1914. Noted Atlanta Constitution columnist Lewis Grizzard described Coach Pell’s reaction to the win at Georgia in this way: “The coach sat on the floor and cried. He is 36-years-old. But he sat on the floor and cried. He didn’t sob. He cried like a man cries when he sits back down in the pew after giving his only daughter in marriage.”

We look back now and see names like Steve Fuller, Jerry Butler, Joe and Jeff Bostic, Steve Kenney, Dwight Clark, Randy Scott, and Jim Stuckey. It’s easy to see how Clemson won with that group of players. However, in 1977 the mindset was completely different. We hadn’t had a big winner in so long a berth in the Gator Bowl looked about as attainable as going to the Super Bowl. Remember that change in attitude.

A victory at South Carolina in the season finale would clinch a Gator Bowl berth against defending national champion Pittsburgh. The USC game turned out to be an epic. The Tigers took a 24-0 lead midway in the third quarter only to have the Gamecocks put on a 27-point blitz. Their last touchdown gave USC a 27-24 lead with just over two minutes to play. Poise, pride and leadership were never more in evidence as Steve Fuller took the Tigers the length of the field capped off by Jerry Butler’s catch game winning catch with 49 seconds left. The storybook season culminated with the awarding of the bid after the game.

The 1977 football season still ranks as one of my greatest Clemson memories. You know how it is when you don’t expect much and things turn out great. There were great players, great games and a super coaching staff.

Much has happened since that year. Pell took Clemson to a 10-1 record and number-six national ranking in 1978. But, at the conclusion of the season he decided to move on to head up the Florida football program. He thought he had a better chance of winning the national championship there. Ironically, Clemson won the national championship just three years later with many of the players he had recruited leading the way.

Coach Pell had some success at Florida, but some transgressions involving NCAA rules led to his demise. The phone never rang after he left Florida and it brought great challenges to his life. Late in life became a Christian and lived his last four years in peace. Not even the lung cancer, which was the final blow, could take away the peace he felt.

Last spring as his days were running out, Charley Pell came back to Clemson for one last journey. Ron West, currently the offensive line coach of the Tigers, Jeff Bostic, Joe Bostic and a few others listened in that crowded home locker room last April as Coach Pell spoke.

Joe Bostic just closed his eyes and let his mind race back to 1977. It was a moving experience. “There are coaches for times and places,” said Bostic. “He was the man for us. He came here and made us a team. He made us believe in ourselves. We were good players, but we just did not know it.”

Al Adams was the assistant sports information director at Clemson in the 70s and then founded the Orange & White. He now is an insurance agent in North Carolina.