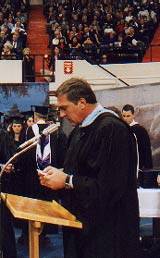 Every year for the last 12 seasons the Virginia football media guide documented the number of graduate students the Cavaliers had on their current roster. It has been an impressive list, a fact that brings pride to alumni and current university administers. The tradition has continued this year, as the 2001 Cavaliers who will face Clemson in Death Valley today have eight active players with degrees.

This year the Cavaliers are not alone in trumpeting academic success, as Clemson has a record seven active players who have already earned their degree. It is an all-time record for a Clemson football team. We aren’t padding the stats with walk-ons either. Not only are all seven on scholarship, all seven are in the Clemson starting lineup. The families of quarterback Woodrow Dantzler (marketing), offensive guard Will Merritt (speech and communications studies), center Kyle Young (secondary education), defensive tackle Nick Eason (sociology), Charles Hafley (sociology), wide receiver Matt Bailey (speech and communications) and offensive tackle T.J. Watkins (marketing) certainly were beaming with pride on their respective graduation days. Merritt graduated last December, Young, Bailey and Watkins followed in May, then Dantzler, Eason and Hafley walked across the Littlejohn Coliseum stage this past Aug. 11.

If you attend a graduation ceremony you can see that receiving an undergraduate degree has meaning to these student-athletes. When Rod Gardner walked across the stage last May to receive his diploma from Jim Barker, he hugged the Clemson president. Dantzler did the same thing this past August.

Having two players of note, Gardner, a first-round draft choice by the Washington Redskins, and Dantzler, a Heisman Trophy candidate, earn degrees is significant. It bodes well for the future because success breeds success, whether it is on the field or in the classroom.

“Younger players see the seniors getting their degree, seeing first hand that it is important to them, and it adds to the younger player’s motivation,” said Bill D’Andrea, associate athletic director for Clemson’s widely acclaimed student-athlete enrichment program. “It sets an example for the younger players. A lot of these players look to the older players for guidance.”

A prime example is defensive tackle Nick Eason and quarterback Willie Simmons. Clemson’s defensive MVP of 2000 earned his degree in three years and three summer sessions. With a red-shirt year on the field in 1998, Eason has a degree with two years of eligibility remaining, a first in Clemson history. Sophomore quarterback Willie Simmons is now on track to trump that accomplishment. The marketing major came to Clemson with credits in hand from advanced placement courses in high school. He is slated to earn his degree in May.

Positive examples are also being set by former Clemson players who have returned to Clemson to get their degrees. As noted in the our opening program of the year, Anthony Simmons, one of the top five tacklers in the NFL last year with the Seattle Seahawks, returned to campus this past summer to work towards his undergraduate degree. He was in classes with current Tiger players and was seen working on his studies in Vickery Hall during the summer.

“Having former players like Anthony Simmons come back to get their degree sends a message to the younger players,” said D’Andrea. “Anthony is making seven figures per year and just came off his best year in the NFL, yet he was back at Clemson working on his degree. It is telling the young players that going to class is important.” The same example is also being set with the Clemson men’s basketball program by Greg Buckner, a member of the Dallas Mavericks, who also spent the summer at Clemson.

In the fall of 2000, Clemson set a record for student-athletes on the academic honor roll with 225, nearly 50 percent of Clemson’s student-athlete population. Their overall GPA for the spring semester of 2001 was 2.80, compared to a 2.82 for the overall student body. Clemson’s football team posted a record 2.58 team GPA, one of six teams to record their highest team GPA on record.

Vickery Hall, the structure itself, and its talented, dedicated staff have a lot to do with the academic success of Clemson student-athletes in all programs. The concept of Athletic Director Bobby Robinson, Vickery Hall was opened in 1991, the first self-standing facility used for the enrichment of student-athletes in the nation. Many schools have followed suit in the last 10 years.

The seven graduates on this year’s team, plus former Tigers like Anthony Simmons who return to the classroom in the middle of their professional careers, are setting a standard and example for Clemson’s current freshmen and future Tigers now in high school. When you take into account the total mission of a University, it is as important an accomplishment as any touchdown or tackle.