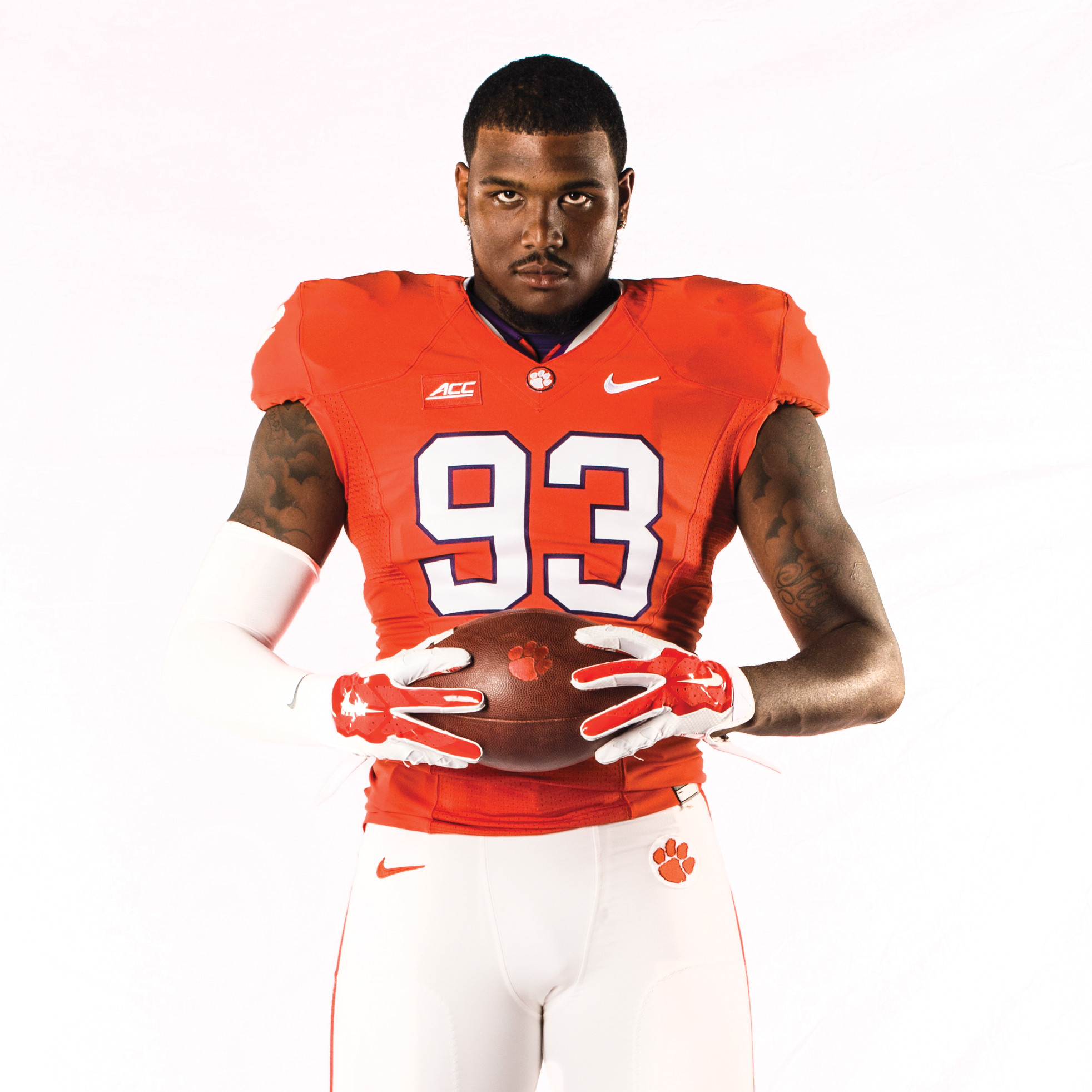 Corey Crawford recently said, “Tell the fans to keep bringing their energy to the home games, and even if they go to the away games, that helps us out, too. The fans should know that they are a big part of our success.”

While the Tiger defense is receiving nationwide attention, prior to the 2013 season, casual fans could not name a player along the defensive front, a startling notion considering the talent Clemson has consistently pumped into the NFL from the defensive line.

Clemson’s defense was dubbed the “No Name Defense” prior to the 2013 season. This obscurity did not bother Crawford. The senior was confident that would quickly change.

“Our team came from the bottom as freshmen and worked together,” said #93. “We understand that the run game starts with us as a defensive line. It was a matter of time before we got better. I knew that sooner or later people would find out who we are.”

Crawford recorded 10.5 tackles for loss in his junior campaign, placing him third on the team. He already has 4.5 tackles for loss and one sack in four games to begin the 2014 season and is well on his way to eclipse his previous totals. But it wasn’t always certain that the senior would return for his final campaign.

Crawford had the opportunity to enter the NFL draft as an underclassman, joining teammates Bashaud Breeland, Martavis Bryant and Sammy Watkins. Ultimately, the Columbus, Ga. native decided to return and obtain his degree.

“The No. 1 reason was to graduate,” admitted Crawford. “It’s something that is big for me and something my family wanted me to accomplish. I wanted to get better so I can be more prepared for the NFL, but the main thing was to come back and graduate.”

Raised a Georgia Bulldog fan and growing up down the road from Auburn, it was a longshot for the high school senior to choose the ACC Tigers. But the family atmosphere cultivated by the coaching staff successfully swayed Crawford to Clemson.

“Everything is all about family…it’s not about one person, one player, one coach,” explained Crawford. “Everyone is in it to win it for everyone. I love the family atmosphere that’s here. I fell in love with it as soon as I got here.”

Fearsome to high school quarterbacks as a star on the G.W. Carver High School squad, Crawford did not always strike fear in opposing college quarterbacks. He quickly found out that college football was not like high school football. The tempo and physicality on the college level was a lot to absorb. He constantly found himself doing mental repetitions to adjust to the game.

The message instilled in him by veteran players during his freshman year helped Crawford hone his craft, advice he still uses on and off the gridiron.

“My freshman year, Andre Branch, Kourtnei Brown and Malliciah Goodman told me to never be complacent,” stated Crawford. “Always work to get better every day. Don’t be satisfied with being an average player. Always try to be great. Ever since then, I have tried to do that in everything that I do.”

After limited reps his freshman year, Crawford was thrust into action as a sophomore, starting all 13 games. He registered 47 tackles and six tackles for loss.

His first career start was in the Georgia Dome against Auburn, a game where much of his family and friends were able to attend. Those family members who were not in attendance were glued to their television screens.

As Clemson marched to a 26-19 victory, it would be back in the Georgia Dome just a few months later to battle a different set of Tigers, Louisiana State, in the Chick-fil-A Bowl. After a dominating performance by the defense, especially by the defensive line, Clemson escaped with a 25-24 victory.

The next game on the calendar was the 2013 opener against Crawford’s childhood team, Georgia. Crawford eagerly awaited the matchup, making the most of his play against the Bulldogs.

With the Georgia offense driving deep into Clemson territory, Crawford dropped back into coverage. Aaron Murray did not anticipate the move, and facing pressure, he threw the ball right into Crawford’s open arms. Instead of immediately going down, the agile Crawford returned the interception 18 yards.

“Take off, run with the football,” said Crawford. “I was surprised Aaron Murray didn’t see me when he threw the ball, but when I caught it, I thought I could score a touchdown or do something positive for the team.”

While each new home game creates a different memory, it is also one fewer game Crawford will play in front of the fans he loves so much. An ultimate teammate and player, it is no surprise Crawford credits the fans for his success.

“It’s mostly for them,” stated Crawford. “Everything we do, we do it for them, and especially when we play at home, their energy helps us impact the quarterback. They are a big part of the reason we are able to do what we do.

“I hope Clemson remembers me as the person I am, and not just a football player. I’m just a guy who comes to work all the time and does it for the fans and for my ‘brothers’.”

With his ultimate goal to play on Sundays, Crawford not only has the talent, he has the attitude NFL coaches covet. His unselfishness and humility make him a leader, an asset to any football team.

As he prepares for the next phase of his career, Crawford knows there is plenty he will miss about the university that molded him, not only as a football player, but as a person.

“My ‘brothers,’ my teammates, my coaches…I feel like in the NFL, you don’t get as close as you do in college with the players and coaches,” added Crawford. “I’m going to miss the family atmosphere Clemson brought to me.

“Clemson is way different from any other school I’ve been to or visited, so I’m going to miss it.”