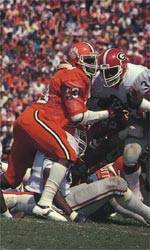 Terry Kinard is the most decorated football player in Clemson history. Those honors will grow today and on Nov. 3 when he is inducted into the College Football Hall of Fame and the Clemson Ring of Honor.

The Ring of Honor ceremony will take place at Death Valley prior to the Florida State game. It will be a special day for Kinard as it will also be the day we celebrate the 20-year anniversary of Clemson’s National Championship, the greatest team accomplishment in Clemson football history.

Kinard, who played for the Tigers from 1978-82 and was named National Defensive Player of the Year by CBS Sports as a senior, will be just the second Clemson player in history to be honored by the College Football Hall of Fame, the first since Banks McFadden in 1959.

Ironically, Kinard burst on the national scene in South Bend in 1979. Starting as a freshman, Kinard had two fourth-quarter interceptions and seven tackles overall to lead Clemson to a 16-10 victory over the Irish. Now 22 years later, he will be inducted in the College Football Hall of Fame, which is located just two miles from Notre Dame Stadium.

“This is a dream come true,” said Kinard. “It is something you don’t expect, but when it does happen you are thrilled. It is a great honor when you consider that only one other Clemson player has been named to the Hall of Fame. To be alongside a legend like Banks McFadden means a great deal.

“Clemson gave me the opportunity. I was very fortunate, I could not have picked a better place to go to school. I played with a lot of great players at Clemson, especially guys on our defense like Jeff Davis, Jeff Bryant and many others. I certainly could not have made it to the Hall of Fame without the great players we had at Clemson at that time.

“I also have to thank Coach (Danny) Ford and the other coaches. I especially have to thank coach Willie Anderson, who recruited me. Years later he gave me the opportunity to go to Oklahoma and serve on his (high school) coaching staff. He impressed upon me the importance of finishing my degree, which I did (from Langston University in Oklahoma). “

Kinard is also greatful to the people at Clemson who have had a positive effect on his career. One of those people is Bert Henderson, associate executive director of IPTAY. “My freshman year I was red-shirted and I needed to have shoulder surgery,” said Kinard. “Bert drove me to the hospital. I wasn’t thrilled about the prospect of having surgery-not at all! He had to talk me into it.

“We sat down and talked about it a long time, and he convinced me that it was something I needed to do for my own good. I went ahead and had it done, and Bert gave me a lot of support and inspiration. That was a rough time for me. I had to sit out and redshirt, while the rest of the team went on to an 11-1 season (1978). But, sitting out that year was the best thing that could have happened to me because of maturity. I really wasn’t ready physically, to compete as a freshman.”

Kinard also credits Bill D’Andrea, currently Clemson’s associate athletic director for student-athlete enrichment, for encouraging him to go back to school and finish his degree requirements. “Bert and Bill D’Andrea stayed on me about getting my degree. Bill was on me all the time. No matter where he saw me, that was the first thing that came out of his mouth. And, it was the same with my mom.”

The door then opened in Oklahoma when Anderson offered Kinard a job and an opportunity to get his degree. “It has made a world of difference. I am sure it made a difference in me getting into the Hall of Fame. Coach Anderson cared about me many years after I left Clemson and it says a lot about him and the people at Clemson.” Kinard had outside motivating factors, but in the end he had to do it himself. “It was pretty tough, after being out of school for so long. It was very different. But, in a sense, it was also much easier. When you come in as a freshman, you’re not very disciplined towards school. Coming back, I was more mature and I knew how to go about studying and planning my time. I found myself staying on top of things, rather than putting everything off until the last minute.” Today, Kinard works in Atlanta serving in management for the Burger King Corporation.

Kinard recorded 17 interceptions during his Clemson career, still the high mark in school history and second in ACC history. He ranked in the top 15 in the nation in interceptions in 1981 and 1982 and was a major reason Clemson had a combined record of 21-1-1 over those two years. Clemson’s defense ranked in the top 10 in the nation in scoring defense each year. He was Clemson’s second leading tackler on the 1981 National Championship team and led the 1982 squad that finished eighth in the final Associated Press poll.

Kinard rates the national championship experience as the highlight of his football career. “I was very fortunate to have gone from Clemson to play in the NFL. But I’d have to say that my experience at Clemson, playing with that group of guys on the National Championship team was more exciting than anything I did on any other level. It definitely made an impact on my life. The closeness of that group and the experiences we shared will never be forgotten.

“At the beginning of that year, none of us had any idea that the season would turn out the way it did. I’m not sure at what point it started to sink in that we were going to be in a position to compete for the National Championship. I’m not sure any of us were really thinking that way. But, we knew we were part of something special because of the way we won games that year. We won some close, tough games.

“As the season progressed, we came to believe that every time we stepped out on the field we were going to win. Part of that was the closeness of the group. Part of it was that we had some players who could really play. You don’t make it through a season like that without great players, guys who can make things happen.”

At the conclusion of his Clemson career, Kinard was chosen in the first round of the NFL draft by the New York Giants, the 10th overall pick of the draft. He played seven years for the Giants, including the team’s 1986 Super Bowl Championship season. Kinard was named to the NFL All-Rookie team in 1983 and the Pro Bowl in 1988.

Since his retirement from the game, Kinard was named to Sports Illustrated’s All-Century team of college football. In 2000 he was named Clemson’s top player of the 20th Century by CNNsi.com. He was also chosen to the USA Today All-Decade team for the 1980s. In 1996 he was named to Clemson’s Centennial Team and received more votes than any other defensive player.

“Terry Kinard was a dominating player because he was a great tackler who also could break on the ball and make the interception,” said Danny Ford, who was Kinard’s Head Coach his entire career at Clemson. “I haven’t seen a player who could dominate a game from the secondary like he could. He covered a lot of ground, he made a coach feel secure about the secondary.

“He had the ability to be a dominant player from the time he was a freshman. You don’t see a lot of freshman safeties take over a game in Notre Dame Stadium, but he did that when we defeated Notre Dame in 1979.

“When you look at what Terry Kinard accomplished individually at Clemson and what Clemson did as a team during his career, you can see that he is most qualified to be in the College Football Hall of Fame.”