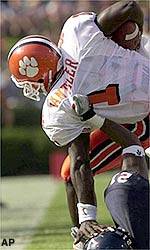 After his record-setting 220-yard rushing, 154-yard passing performance at Virginia on Sept. 23, it was apparent to the media and yours truly that Woody Dantzler was now a legitimate Heisman Trophy candidate. It was his fourth straight amazing performance, and he was now leading the ACC in rushing and passing, a double that has never been accomplished over the course of the season in the ACC and probably no other conference in any season on the planet.

While he was getting dressed and prior to his weekly postgame meeting with the media, I asked Dantzler if he was comfortable with our office publically proclaiming his candidacy.

“Can the other 10 starters on offense get a trophy?” asked Dantzler immediately. “If you can at least include the offensive line in everything then, okay.”

That is what has led to the, “Team Dantzler for Heisman” concept (see page 118) that adorns the front cover of the four-page flyer we produced to make the national media aware of his, and the Clemson offense’s, unique accomplishments this year.

“The other players on offense work just as hard as I do. It should be a team award.”

Woody Dantzler is a reluctant candidate if there ever was one. One of the reasons he can handle the “Heisman Hype” is he really doesn’t care if he wins the Heisman Trophy. He just likes to play the game. Dantzler shys away from the limelight and truly is a team first guy, it is not a put on. Last year when he was in constant competition with Brandon Streeter for the starting quarterback position, he rooted twice as hard for Streeter compared to any other player.

If he gains just 10 yards, but Clemson wins effectively, he is just as happy as if he recorded a 374-yard total offense game. He rarely watches games on television and really can’t tell you much about the other Heisman candidates.

He just cares about getting Clemson a “W” in the next game. That team first attitude is something you see within the entire team and it is a reason Clemson is off to such a great start this year. I see it in the way his teammates kid him about winning the Heisman. I see it in the comments of his offensive line, who consider Dantzler to be one of them because of his toughness when it comes to running the ball up-field.

Each Monday, Dantzler meets with the local media for 30 minutes, then does national interviews on Wednesday from 12:00 Noon to 1:00 PM. He does the interviews because he knows it is his job as the Clemson quarterback and because it is for the good of the Clemson program. But, I know he would rather be catching up on his studies (he is a near B student) or watching film of the next opponent.

Can Woody Dantzler really win the Heisman Trophy, even with such a late start as a candidate? In this day and age, yes. Times have changed in the last 10 years. The best man wins the award because of the streamlined dissemination of information available through the internet, television and other media outlets. Although we produced one, fancy brochures won’t make or break Woody Dantzler. If he wins it, it will be because of what he and the Clemson team accomplishes on the field.

Glamour and glitz don’t matter as much as they did many years ago. In 1956, Paul Hornung, a Notre Dame running back, won the Heisman Trophy on a team that finished with a 2-8 record. He had great individual statistics, leading the nation in total offense, but the key to his winning the award took place on a midweek afternoon late in the season.

Notre Dame publicist Charlie Callahan, who holds the national SID record for Heisman winners with four, brought Hornung over to the Rockne Memorial and had his picture taken next to a bust of Knute Rockne, the legendary deceased Notre Dame Coach. That photo ran on the national wire and was published in nearly every paper in the country, along with his impressive stats. That story didn’t document how badly Notre Dame played as a team that year. Hornung is still the only Heisman Trophy winner to play on a losing team.

I know the Hornung story well because 25 years ago his Heisman Trophy served as an oversized paper weight on a desk where I worked in the student area in the Notre Dame sports information office. In those days, the Downtown Athletic Club (who presents the award) only gave out one trophy to the recipient. Most winners keep the trophy in their home, but Hornung was very close to Notre Dame sports Information Director Roger Valdiserri, so he let Valdiserri him keep his Heisman in the SID office. (Today the Downtown Athletic Club makes two trophies, one for the recipient and one for the school’s trophy case.)

We used to have a lot of fun with Hornung’s Heisman. It was a great way to impress co-eds. “Hey, want to have you picture made with a Heisman Trophy?” (Obviously, you had to be seeing a girl who knew football, but you get the picture. ) We had a rule, though, you couldn’t take the Heisman out of the office. We almost risked it for a dorm party one weekend, but we figured we all might get fired if we lost it.

Notre Dame has had the most Heisman Trophy winners with seven. They haven’t had one since 1987 when Tim Brown, still an NFL star with the Oakland Raiders, won the award. Brown and Dantzler have something in common, unique statistical accomplishments. Brown helped popularize the statistic all-purpose running because he showed unique ability as a receiver, rusher and kick returner. Dantzler has unique skills as a rusher and passer, and has a chance to become the first player in Division I history to rush for a 1000 yards and pass for 2000 in the same season.

Back in December of 1987, when Brown returned to South Bend with the Heisman in his arms, a local television station met him at the airport for a live interview. During the interview he thanked his teammates and the Notre Dame student body for their support the last four years. He wanted to share the award with the entire campus. So, he announced on live television that anyone who wanted to have their picture made with the Heisman Trophy could come by the lobby of his dorm that night.

The line went down the stairs out the door and around the North quad of the Notre Dame campus. Brown stayed up most of the night signing autographs and posing for photos.