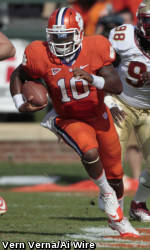 NEW ORLEANS, LA – For the second week in a row, Tajh Boyd, the sophomore quarterback from No. 13 Clemson, has been selected as the Manning Award Player of the Week. Boyd earns the honor over seven other Manning Award Stars of the Week after coming from behind to pass Ball State quarterback Keith Wenning in the Allstate Sugar Bowl’s Facebook contest.

Boyd completed 22-of-35 passes for 344 yards and three touchdowns to lead Clemson to a 35-30 victory over nationally-ranked Florida State – the Tigers’ second straight victory over a Top-20 foe. The win lifted Clemson to 4-0 for the first time since 2007. The Hampton, Va., product’s efforts led the Tigers to 455 yards of total offense against what had been the nation’s fifth-ranked defense. His 344 passing yards are the fourth-most in school history, the second consecutive week in which he has tallied a top-four total. He also added 31 yards rushing to give him 375 yards of total offense, the seventh-highest total in program history.

In addition to collecting Manning Award Player of the Week honors, Boyd was named the ACC Offensive Back of the Week for the second straight week. He gets a chance for still more heroics as the Tigers go on the road this weekend to face yet another ranked opponent, this time No. 11 Virginia Tech (5 p.m. Central on ESPN2). No ACC team has ever defeated three straight ranked opponents.

The Clemson fans started slow this week as Wenning led for most of the campaign. However, in final night voting, the Tiger faithful pushed Boyd over the top once again. Wenning completed 24-of-30 passes for a career-high 320 yards and three touchdowns in just three quarters of play as Ball State topped Army, 48-21. The win improved the Cardinals to 3-1 – their second-best start since 1995. USF’s B.J. Daniels finished third after passing for 202 yards and running for 130 yards in a 52-24 win over UTEP.

The honor will be recognizing its eighth winner this year. USC’s Matt Leinart was the inaugural winner of the award in 2005, followed by Texas’ Vince Young in 2006. Both went on to be top 10 NFL draft picks. In 2007, LSU’s JaMarcus Russell earned the award and was the NFL’s No. 1 draft pick. Boston College’s Matt Ryan claimed the award in 2008 and was drafted No. 3, quickly becoming the starting quarterback for the Atlanta Falcons. In 2009, Florida star Tim Tebow earned the honor – he also went on to be selected in the first round of the NFL Draft. The 2010 winner was Texas signal-caller Colt McCoy, the winningest quarterback in college football history, who was selected by the Cleveland Browns in the draft. Last year saw Auburn’s Cameron Newton earn the award, prior to being selected No. 1 overall in the 2011 NFL Draft by the Carolina Panthers.