Anotha’ W in The Valley 🐅🐾 pic.twitter.com/oY9P3oeubC

CLEMSON, S.C. — Top-ranked Clemson improved to 6-0 on Saturday with a 47-21 victory over Syracuse. The win marked the 35th consecutive regular season game that the Tigers came out on top, which is the longest such streak in ACC history.

The Tigers’ defense forced a momentum-swinging strip-sack in the third quarter that was returned for a touchdown by Andrew Booth Jr. Clemson also had three interceptions, one each by Nolan Turner, Mike Jones Jr. and Jalyn Phillips. The Tigers allowed only 11 first downs to their 27.

Travis Etienne scored three rushing touchdowns on 16 carries and totaled 86 yards on the ground. Trevor Lawrence was 27-43 passing for 289 yards and two touchdowns en route to Clemson’s sixth straight game scoring 37 or more points. This is the first time in school history the Tigers have accomplished that feat to open a season.

Clemson got on the board just 83 seconds into the game when Lawrence found Cornell Powell for a 25-yard touchdown. Following a B.T. Potter field goal, Etienne added a 25-yard touchdown run to give the Tigers a 17-0 lead after the first quarter.

The Orange would respond with a touchdown early in the second quarter, but Lawrence later hit Davis Allen for a 17-yard score, which marked Allen’s third touchdown of the season. Syracuse returned a Lawrence interception 39 yards for a touchdown and the Tigers responded with another Potter field goal to give them a 27-14 lead as the first half expired.

The Orange made it a one possession game when quarterback Rex Culpepper hit wide receiver Nykeim Johnson on an 83-yard bomb to open the second half scoring.

Syracuse had possession with the potential to take the lead with a touchdown, but Bryan Bresee forced a fumble that Booth scooped up and returned 21 yards for his first career touchdown, increasing the Tiger lead to 34-21 as the third quarter came to a close.

Etienne’s second touchdown run of the game, this time for nine yards, gave the Tigers a 40-21 advantage that sealed the Orange’s fate. The score placed Etienne in the top-10 in FBS history for rushing touchdowns in a career (64).

Etienne recorded his third rushing touchdown of the game, capitalizing on a Mike Jones Jr. interception return that set the Tigers’ offense up on the Syracuse three yard line. The Clemson defense held firm as defensive back Jalyn Phillips recorded his first career interception and the Tigers closed out the 47-21 victory.

The Tigers will be back in action on Saturday, Oct. 31, when they take on Boston College at Death Valley. Kickoff for that Halloween day matchup is slated for noon ET.

Defense steps up and makes the big play!

Jones gets to the QB, Bresee forces the fumble and Booth scoops and scores! 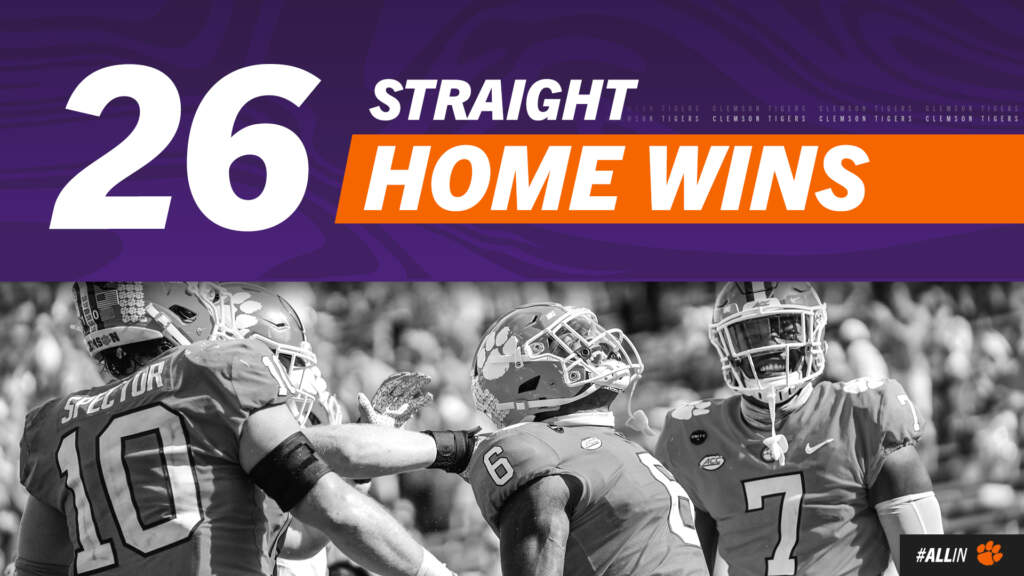 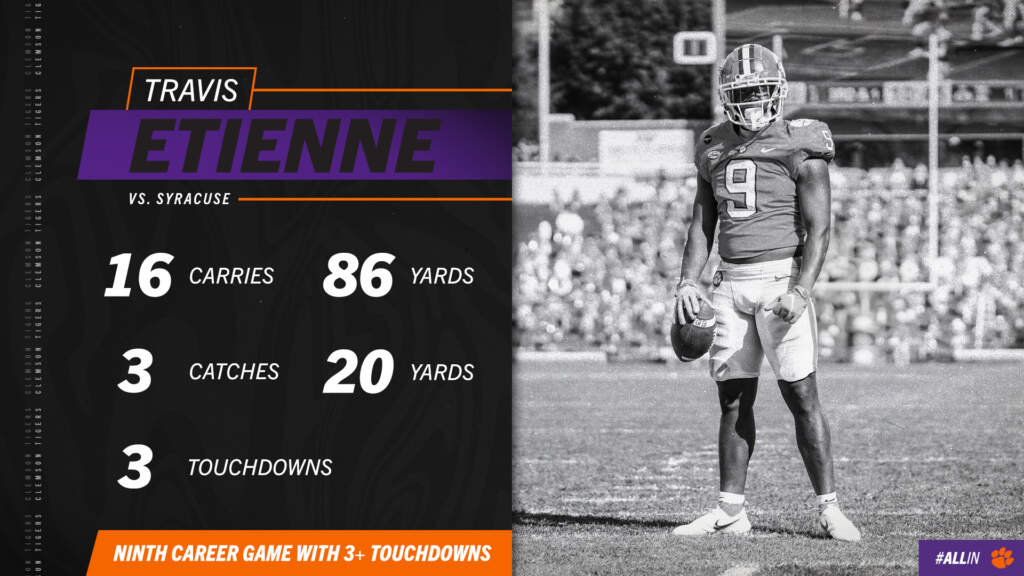