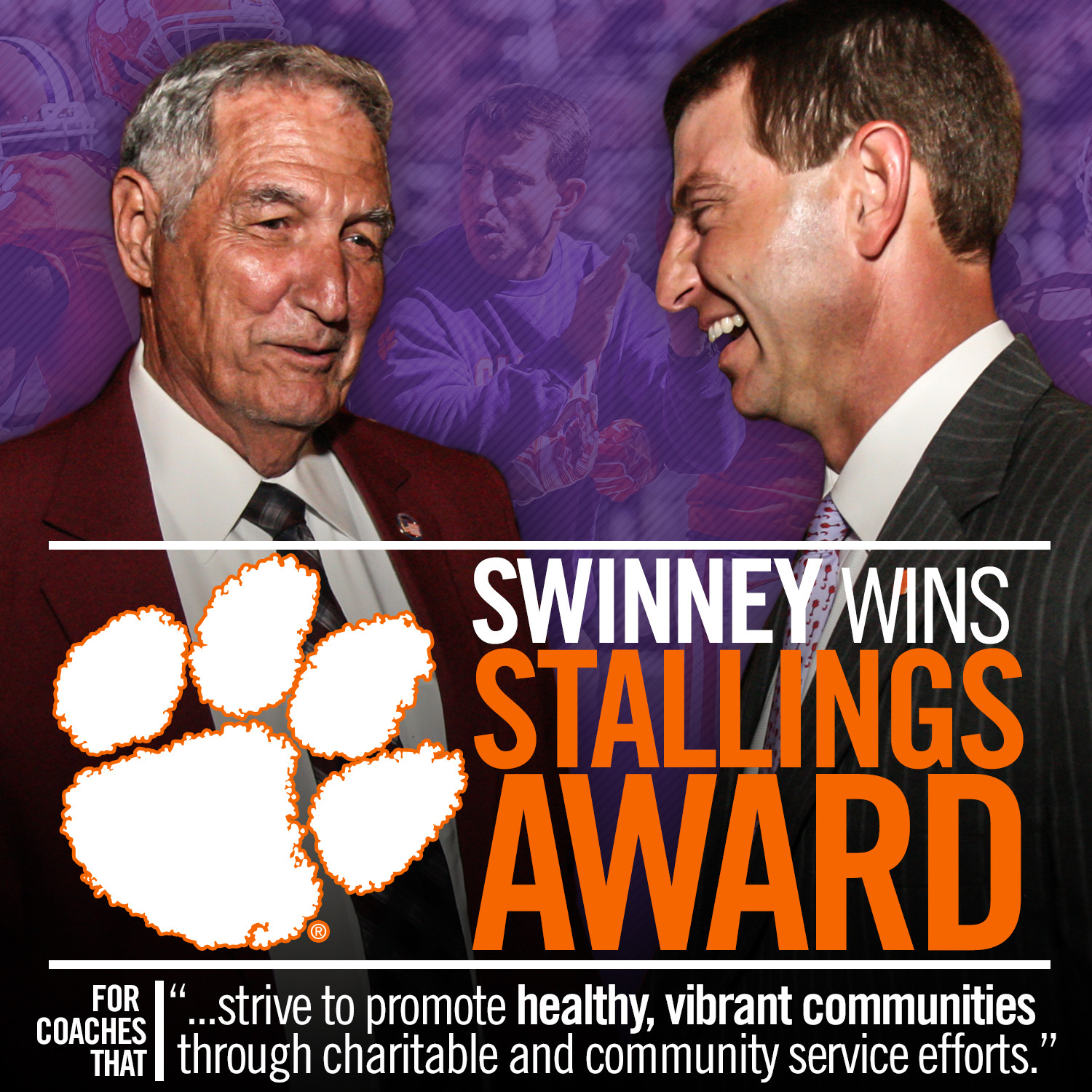 CLEMSON, S.C. – Head coach Dabo Swinney will receive the 2015 Gene Stallings Award on Tuesday night at a banquet in Dallas, Texas. The award will be presented to Swinney by his former offensive coordinator, Chad Morris, now the head coach at SMU.

The Stallings Award was created to honor college football head coaches who are also humanitarians and strive to promote healthy, vibrant communities through charitable and community service efforts.

“I am Incredibly honored to receive the Stallings Award,” said Swinney. “Coach Stallings was my mentor for seven great years. The lessons I learned from him and the example he was to me as a father, husband and as a giver to the community definitely shaped me as a young man.

“Every day I think about Coach Stallings or apply one of the lessons of life that he taught me. There are a lot of awards out there, but this is one that I will cherish forever because of the man it is named for. I just want to say thank you for this great honor and for the opportunity to have my name associated with the Stallings Award.”

Swinney’s “All-In Foundation” has made a significant impact on the local community and beyond. The mission of the foundation is to raise awareness of critical education and health issues in order to change lives across the state of South Carolina.

By the end of 2015, the foundation will have distributed over $1.7 million to its focus areas and grant programs. The focus areas are breast cancer prevention and research, family effect, the Call Me Mister Program and Life Programs.

Stallings had a special impact on the foundation’s interest in the Life Programs. The manner in which he handled the life experiences of raising a special-needs child is well documented. In addition to being touched by Stallings, Swinney and his wife, Kathleen, were also touched by John Mark Stallings. In honor of John Mark, the foundation supports the ClemsonLIFE Program and the RISE Program. By the end of next month, they will have donated $220,000 to the Life Programs.

Swinney has been the head coach at Clemson for six full seasons, and five of them have ended with a top-25 national ranking, including a top-15 ranking each of the last three years. The Tigers were 10-3 in 2014 and were No. 15 in the final polls. Clemson just completed a four-year period with a 42-11 record, the most wins in a four-year period in Tiger history. Clemson has closed the last three seasons with bowl wins over Louisiana State, Ohio State and Oklahoma.