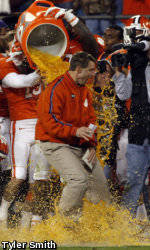 Vote for Swinney for Liberty Mutual Coach of the Year

CLEMSON, SC – Clemson Head Coach Dabo Swinney has been named one of 10 FBS Division finalists for the Liberty Mutual Coach of the Year Award. The honor is presented each year by the Liberty Mutual Insurance Company. The Award takes into account performance on the field and excellence in community service and academic achievement by student-athletes.

The finalists for the FBS Divison are Mike Gundy of Oklahoma State; Brady Hoke of Michigan; Mark Hudspeth of Louisiana at Lafayette; Mike London of Virginia; Les Miles of Louisiana State; Bobby Petrino of Arkansas; Mark Richt of Georgia; Nick Saban of Alabama; Bill Snyder of Kansas State and Dabo Swinney of Clemson.

Fans can visit coachoftheyear.com between December 6 and December 22 to vote daily among the finalists in each division. Selection committees of more than 50 College Football Hall of Fame players and coaches – including Archie Manning, Lou Holtz, Vince Dooley, Ronnie Lott, Archie Griffin – and the national college football media, such as Kirk Herbstreit, Stewart Mandel and Tim Brando, will also cast votes for the winners to ensure coaches are evaluated fairly and measured against the specific values of responsibility and integrity.

Each winner receives a $50,000 donation from Liberty Mutual to the charity or charities of his choice, as well as a $20,000 scholarship grant in their name to their school’s alumni association.

Clemson, who was unranked in the preseason, ranks 14th in the AP and USA Today polls entering the bowl season and was 15th in the final BCS poll, tied for Clemson’s highest finish in the BCS.

The third-year Clemson coach has taken the Tigers to a 10-3 record overall, including four wins over top 25 teams, tied for the second most in the nation and the most in one season in school history. The Tigers own two wins over a Virginia Tech team that was ranked in the top 10 in the nation, including third ranked prior to the ACC Championship game. That tied for the highest ranked team Clemson has defeated in its history.

Earlier in the year Clemson defeated top 25 teams from Auburn, Florida State and Virginia Tech on consecutive weeks, the first ACC team to defeated teams ranked in both polls in three straight games. The 10 wins are the most for the Clemson program since the 1990 season.

Swinney’s Tigers will play in the Discover Orange Bowl against West Virginia on January 4. It will be Clemson’s first appearance in the Orange Bowl in 30 years.