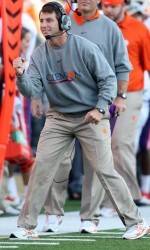 Swinney Number One in APR Among Active FBS Coaches

CLEMSON, SC – A study by CBSSports.com shows that Clemson Head Coach Dabo Swinney is number-one in the nation among active Football Bowl Subdivision coaches in terms of Academic Progress Rate.

The site compiled the APR averages for 109 of the 120 FBS coaches using data provided by the NCAA from the 2003-04 academic year through this past year. (The 11 coaches in their rookie year in 2011 were not included because they have not worked a full season.)

Swinney’s average APR since he became Clemson head coach in 2008 is 988, best in the nation and two points ahead of second place Pat Fitzgerald of Northwestern. Ken Niumatalolo of Navy is third with a 981 score, while Paul Johnson of Georgia Tech is fourth at 980.

The data is coach specific. The scores are based on a perfect score of 1000 for the statistic that rates the progress of student-athletes through their career, leading towards graduation.

“There is no secret formula,” said Swinney. “It’s just a total commitment from all aspects of the administration, the coaching staff and the players. You must have really good policies that everyone understands. We have that here. Everyone is on the same page. It’s black and white.”

The website also computed the APR scores for each conference and the ACC had the top average at 961.7. Four of the top eight coaches nationally are from the ACC. In addition to Swinney and Johnson, Frank Spaziani of Boston College is seventh (978) and David Cutcliffe of Duke is eighth (976).