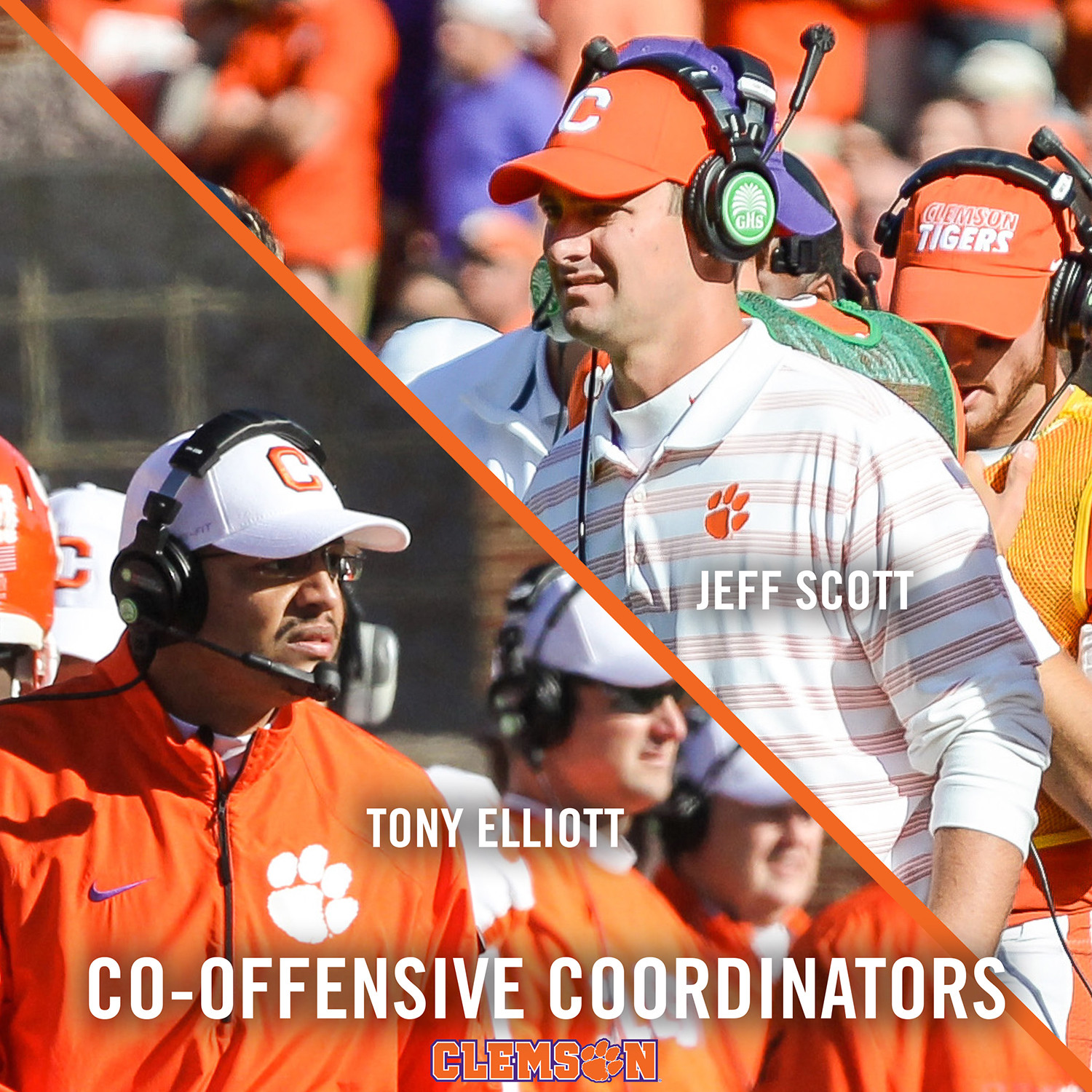 CLEMSON, S.C. – Head Coach Dabo Swinney announced Tuesday that Tony Elliott and Jeff Scott will serve as co-offensive coordinators on his staff starting immediately. Chad Morris, Clemson’s offensive coordinator the last four seasons, was announced Monday as the head coach at SMU.   Elliott is finishing his fourth season as Clemson’s running backs coach. Scott has been on Swinney’s staff as wide receivers coach for all 86 games and seven years he has been Clemson’s head coach. Both Elliott and Scott are Clemson graduates and former Tiger wide receivers.   “I am very excited to announce that Tony Elliott and Jeff Scott will serve as co-offensive coordinators,” said Swinney, who became Clemson’s head coach in October 2008. “These are two of the brightest young coaches in the business. They have had a huge impact on our offense when it comes to the overall gameplan, gameday decisions, coaching their positions and have also been big reasons for our recruiting success. “One of my overall philosophies is to promote from within when it is feasible. Both of these coaches are highly qualified and ready for this opportunity. We have been prepared to make this staff move for some time.   “Tony and Jeff were teammates at Clemson at the same position for three years and have worked together as coaches for four. They have a great relationship.”   Elliott, who turned 35 on November 26, is a 2002 Clemson graduate who was a co-captain of Clemson’s 2003 team that finished with a 9-4 record and a top-25 ranking. An outstanding student, Elliott was a recipient of the ACC’s Weaver-James-Corrigan scholarship in 2003 and was a First-Team Academic All-ACC selection.   Elliott began his coaching career in 2006. He served as wide receivers coach at SC State for two seasons, then served in the same capacity for three seasons at Furman.   Elliott became Clemson’s running backs coach in 2011 and the Tigers have won 41 games since he joined the staff, the most in school history in any four-year period.  That includes 27 wins over ACC teams, also the most in any four-year period in Tiger history. The 2011 Clemson team won the ACC Championship and the 2012 and 2013 teams finished the season in the top 10 of the USA Today poll. This year’s Clemson team is currently No. 19 in both polls.   Elliott coached current Arizona Cardinals running back Andre Ellington, who led the NFL in yards per carry in 2013 and has been a leader of the Cardinals this year. Ellington was a 1,000-yard rusher for the Tigers in 2011 and 2012, while Roderick McDowell was a 1,000-yard rusher for the 2013 Tigers.     Freshman Wayne Gallman has 714 rushing yards so far this year and is coming off a 191-yard performance in Clemson’s win over South Carolina last Saturday, the most by a Tiger freshman since 1952.   Scott, who will turn 34 on December 28, is a 2003 Clemson graduate who was a wide receiver and holder on the Tiger bowl teams of 1999, 2000, 2001 and 2002. Clemson finished 15th in the nation in 2000. His first job in coaching was as the head coach at Blythewood High School near Columbia, S.C. in 2006. He took that first-year program to a 14-1 record and the state championship, a first for any school in the state of South Carolina in its initial year competing in the sport.   After spending the 2007 season as a wide receivers coach at Presbyterian College, he came to Clemson as a graduate assistant at the start of the 2008 season. When Swinney was made interim head coach in October of that season, Scott became a full-time assistant coach.   Beginning with the 2009 season, Scott also took on the role of recruiting coordinator and Clemson has had a top-20 recruiting class according to ESPN.com each year he has been in charge of that aspect of the program. Clemson’s 2015 recruiting class is currently ranked in the top five nationally by most services.   Scott has coached some of the top wide receivers in Clemson history, as his list of former players includes current NFL players Sammy Watkins, DeAndre Hopkins, Martavis Bryant and Jaron Brown. Watkins and Hopkins were first-round draft choices.   Two of his current players, freshman Artavis Scott and sophomore Mike Williams, were named Second-Team All-ACC on Monday.   “I am very excited about our offense moving forward under the leadership of these two coaches,” added Swinney. “We look forward to beginning our bowl practice at the end of next week.”