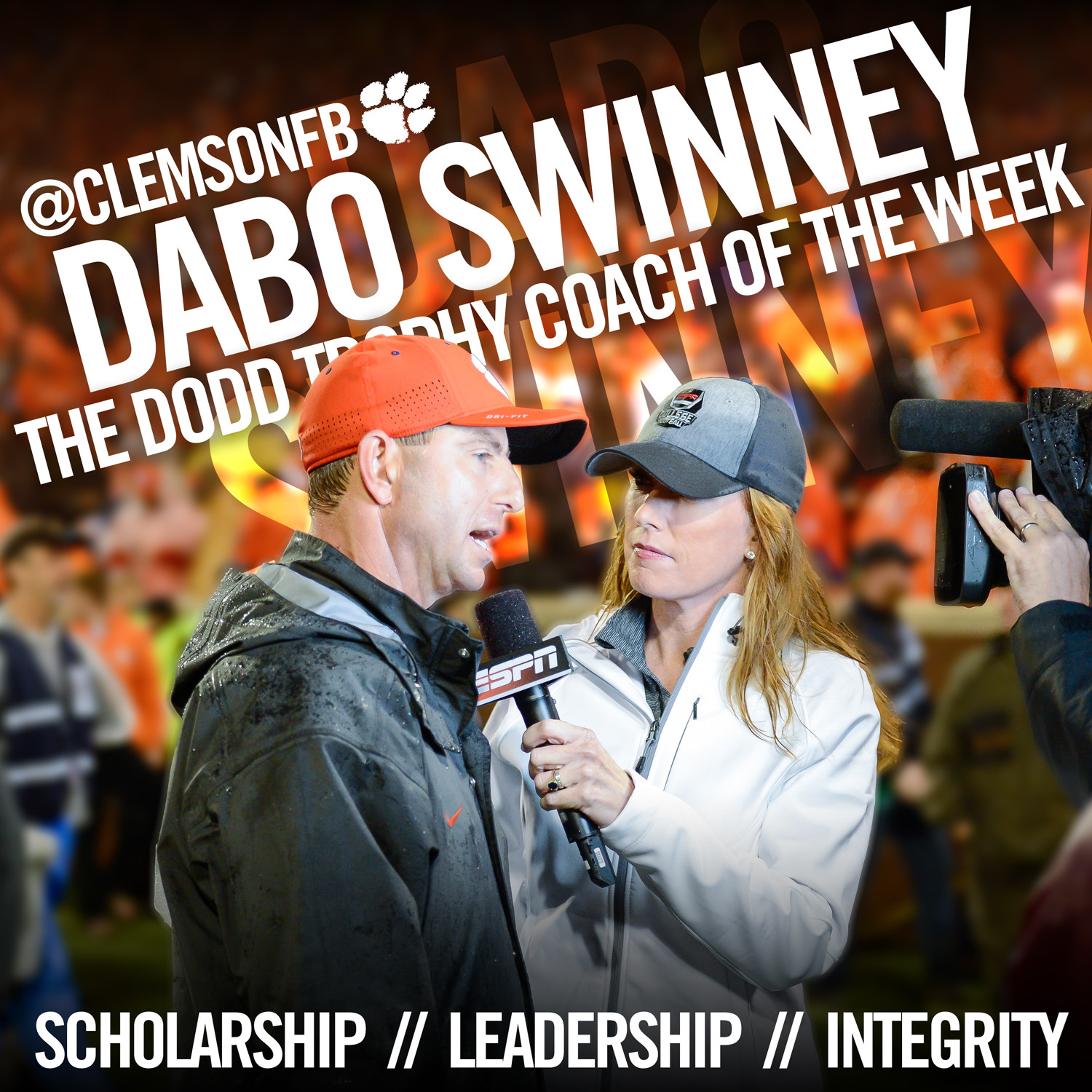 Atlanta, Ga.–Officials from the Bobby Dodd Coach of the Year Foundation and Chick-fil-A Peach Bowl today announced that Clemson Head Football Coach Dabo Swinney has been selected as The Dodd Trophy Coach of the Week.

The Dodd Coach of the Week Award honors the football coach whose program embodies the award’s three pillars of scholarship, leadership and integrity, while also having success on the playing field during the previous week.

“A previous winner of the Dodd Trophy Coach of the Year award, Coach Swinney has done remarkable things during his time as head coach at Clemson,” said Jim Terry, Chairman of the Bobby Dodd Coach of the Year Foundation. “The Tigers just beat a top-10 Notre Dame team in front of a national audience and continuously post APR scores that rank in the top-10; and his ‘All In Team’ does great work throughout the state.”

Since Coach Swinney has been at the helm, Clemson has achieved success in both the classroom as well as on the field. In 2014, the team registered an Academic Progress Rating (APR) score of 984 out of a possible 1,000, which ranked eighth in the country. On top of that, Clemson student-athletes had the fifth-best graduation success rate nationally. From 2011-2014, Clemson finished in the top-10 of APR scores and the final AP Top-25 Polls — the only FBS program that could make that claim.

One of Swinney’s biggest successes has been away from the football field with his “All In Team” Foundation. Created in 2009, the goal of the foundation is to raise awareness of critical education and health issues in order to change lives of people across the state of South Carolina. Within the foundation, they support five specific initiatives including breast cancer research, student mentors and LIFE programs at Clemson. To date, the foundation has raised more than $1 million.

On Saturday night, No. 12 Clemson defeated No. 6 Notre Dame 24-22 in Death Valley. With the victory, the Tigers remained undefeated and moved up to No. 6 in this week’s AP Top-25 Poll.  Now in his eighth season, Swinney has directed Clemson to a 65-26 record and already has had the Tigers in the final top 25 of both polls in five seasons.  He led the program to the ACC Championship in 2011.The program has had four consecutive season of at least 10 wins and the 42 wins over the last four years are the most in school history for that time period.

The Dodd Trophy – along with the Dodd Trophy Coach of the Week Award – celebrates the head coach of a team who enjoys success on the gridiron, while also stressing the importance of scholarship, leadership and integrity.