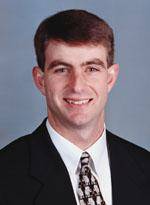 “Dabo Swinney is an outstanding addition to our staff,” said Bowden. “I was his position coach when I was at Alabama. He came in as a walk-on and earned a scholarship. I have first-hand knowledge of his work ethic. He played on a national championship team at Alabama.

“As a coach, he is an outstanding teacher who has learned the game from some outstanding coaches, including Homer Smith, who had a positive effect on my career. His resumas a recruiter is most impressive. He signed 30 players in his career at Alabama.”

Swinney, 33, received a bachelor of science degree in commerce and business administration at Alabama in 1993 after lettering three times for the Crimson Tide (1990-92). A walk-on who went on to earn a scholarship, Swinney played at wide receiver and was a member of Alabama’s 1992 National Championship team under Gene Stallings. His position coach was Bowden in 1989 and former Tiger assistant Woody McCorvey from 1990-92. Swinney was also an All-SEC Academic team and SEC Scholar Athlete Honor Roll member in both 1990 and 1992.

Along with his appearance in the 1993 Sugar Bowl, his team played in the 1991 Fiesta Bowl, 1991 Blockbuster Bowl, and 1990 Sugar Bowl. Both Sugar Bowl appearances came after an SEC title. After his playing career, he served as a graduate assistant during the 1993-95 seasons at Alabama, where he coached in the 1994 Gator Bowl and 1995 Citrus Bowl. In both the 1994 and 1995 seasons, he coached Alabama in the SEC Championship game after winning the SEC Western Division title. In December of 1995, he received a masters of business administration at Tuscaloosa.

Swinney became a full-time assistant at Alabama in February of 1996 and coached a total of five seasons on a full-time basis. He was assigned to coach the Crimson Tide’s wide receivers and tight ends in 1996, a season that saw Alabama win the SEC Western Division championship and make an Outback Bowl appearance. The following season, when Alabama played in the Music City Bowl, he solely coached the tight ends under new Head Coach Mike DuBose. Then in January, 1998, he coached Alabama’s wide receivers, a position he held for three seasons. At the end of the 1999 season, Swinney coached the Crimson Tide in the 2000 Orange Bowl after winning the SEC championship game.

Swinney coached four players at Alabama who have played in the NFL, including Freddie Milons, Alabama’s all-time leading receiver in terms of total receptions, second in yardage.

In all, Swinney was a part of six 10+ win seasons and five top-10 finishes at Alabama as a player and coach. Since his last season in 2000, he has been in private business in Alabama. Swinney is married to the former Kathleen Bassett in 1994. The couple has two boys, Will (4) and Drew (3). Swinney was born November 20, 1969 in Birmingham, AL.