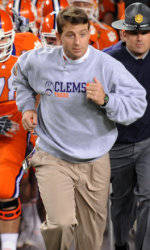 Swinney Named ACC Coach of the Year by Sporting News

CLEMSON, SC – Clemson Head Coach Dabo Swinney has been named ACC Coach of the Year by the Sporting News. Swinney led Clemson to its first Atlantic Division championship with a 6-2 conference record. The Tigers lost in the ACC championship game to Georgia Tech on December 5, by a 39-34 score. The Tigers are 8-5 overall entering the Gaylord Hotels Music City Bowl game against Kentucky.

Swinney is in his first full season as Clemson head coach. He is tied for second nationally behind Oregon Coach Chip Kelly in terms of victories by first year head coaches this year. His eight wins this year are tied for the fifth most among first-year Clemson coaches.

Among Clemson’s six wins this year were victories over Miami (FL) and Florida State. This year marks the first time that Clemson has beaten both Miami (FL) and Florida State in the same season. Clemson defeated eighth ranked Miami on the road on October 24 by a 40-37 score in overtime. It tied for the highest ranked team Clemson has beaten on the road in school history. The six conference wins are the most for the Clemson program since 2003.