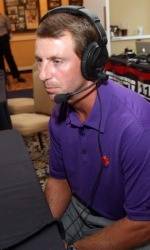 Swinney Likes the Makeup of his Football Team

PINEHURST, NC – Though the media on Monday picked Florida State to win the Atlantic Coast Conference with an overwhelming vote of 50-18 over defending champion Virginia Tech, Clemson head coach Dabo Swinney said it is hard to really answer that question in July.

“We are not going to know the answer to that until the end of the season,” he said to the media during the second and final day of the ACC Football Kickoff in Pinehurst, NC.

Swinney and the Tigers were picked second in the Atlantic Division behind Florida State by the 71 members of the media that voted. Clemson was followed by NC State, Boston College, Maryland and Wake Forest.

The Hokies, who went 11-3 last year, but lost a lot of talent on offense, especially with the departure of ACC Player of the Year Tyrod Taylor at quarterback, are predicted to win the Coastal. They received 66 first place votes.

Swinney understood why the media picked Florida State and Virginia Tech, but he served notice that there are several other teams no one is looking at right now that could sneak up and take the conference crown.

“If you track this conference that is how it has been a few times,” he said. Could Clemson be one of those schools?

Clemson came oh so close to achieving those goals two years ago when the Tigers lost to Georgia Tech in the closing seconds of the ACC Championship game. However, last year his team dropped off a bit. They lost five games by six points or less, including two on the final play of the game at Auburn and at Florida State.

With the changes on offense thanks to the addition of Chad Morris as offensive coordinator, and additional coaching changes at running back, offensive line and defensive end, Swinney says he can see a spring in his players’ step. He sees the excitement in his their eyes and the confidence they can make the 2011 season a special one.

“That is how they have been since the start of the off-season,” Swinney said. “Starting in January they just went back to work. They embraced the changes that we made. Coming out of spring practice, once everyone got to see what we were doing and how we address certain problems, there was real enthusiasm and excitement coming out of spring ball that carried right over into the summer.

“Any competitor is anxious to get back to work and have that next opportunity. It doesn’t matter if it is a baseball, basketball or football player… A lot of these guys have had a good glance at the penthouse and a good smell of the outhouse in two years. They have seen both extremes and I don’t think there is any question on what they like better.”