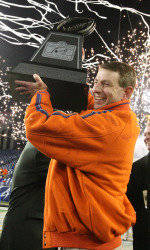 Clemson, SC – Clemson finished 24th in the final AP college football poll released on Friday. The Tigers were 30th in poll points entering the bowl season, but jumped six spots after defeating Kentucky in the Music City Bowl, 21-13, on December 27.

“After a 2-3 start, finishing in the top 25 is a great accomplishment for this team and it showed the team’s character throughout the season,” said Clemson Head Coach Dabo Swinney. “There were a lot of questions about out team entering the season with a new head coach, a first-year offensive coordinator, two new safeties on defense, and a new quarterback to lead the offense.

“Winning the Atlantic Division for the first time, winning a bowl game and finishing in the top 25 are all accomplishments that have set a good foundation. It gives us something to build on.”

Swinney was one of just two coaches in his first full season with a program to take his team to a top 25 final ranking. Chip Kelly of Oregon, who led the Ducks to a number 11 final AP ranking, was the only other first-year coach to do it this year. Swinney was the only first year coach in the nation to take his program to a final top 25 finish without a preseason ranking.

Northwestern, Houston, East Carolina, Arizona, Oklahoma State, Stanford, West Virginia and Oregon State were all ranked ahead of Clemson in the pre-bowl poll, but the Tigers jumped ahead of those schools in the final rankings.

Overall, this is the 25th season Clemson has finished in the top 25.