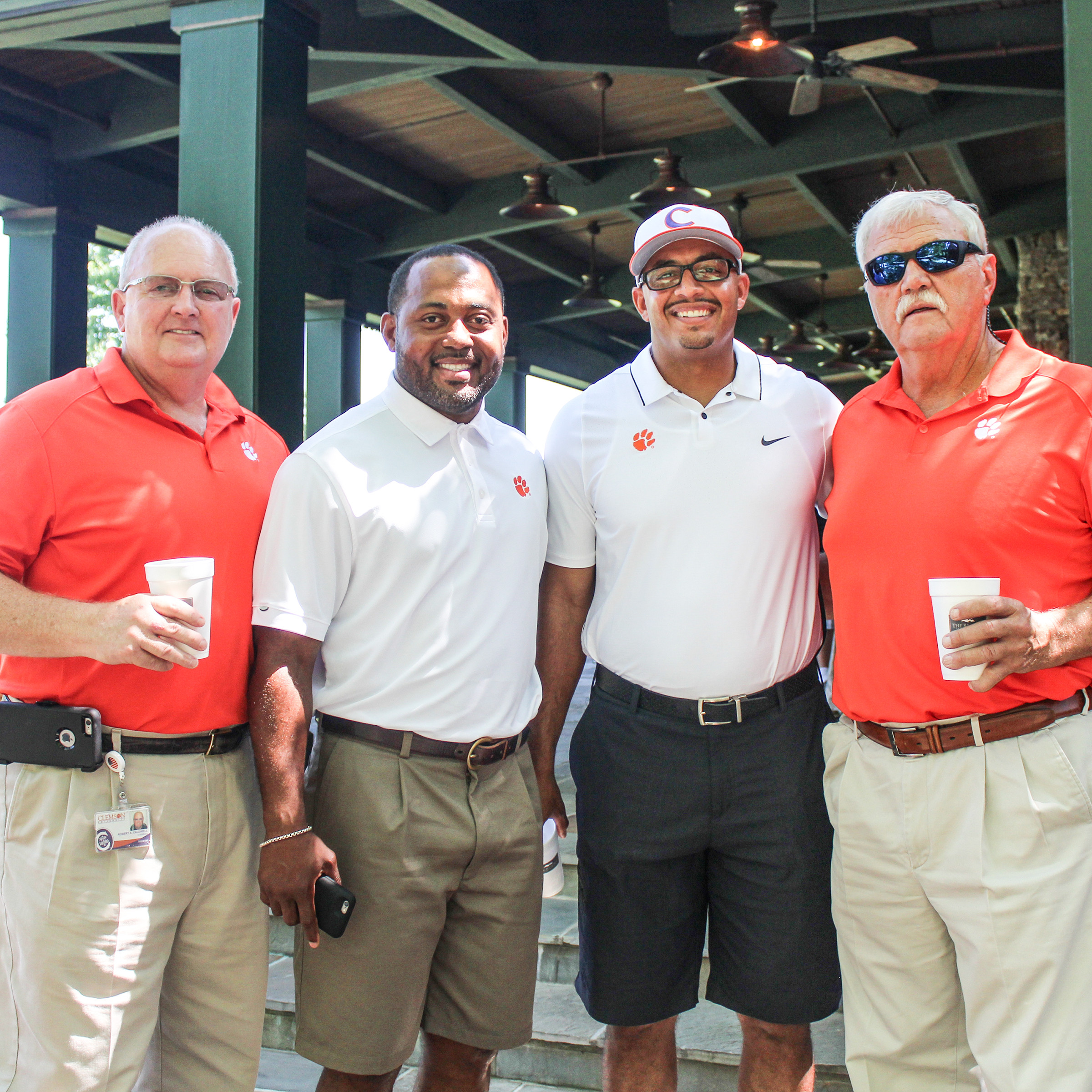 The unofficial start to the 2016 Clemson football season is here.

On Tuesday, Dabo Swinney and his assistant coaches met with members of the local media during the program’s annual preseason golf event held at The Reserve at Lake Keowee.

It’s one of the best times of the year, because it means August camp gets underway in a couple of weeks.

Later this week, Swinney will head to Charlotte with team leaders Deshaun Watson and Ben Boulware to meet with ACC media at the conference’s annual summer kickoff. Then, the head coach will board a plan to Bristol, Conn., next week for a trip to ESPN’s headquarters and the annual “car wash” with other league coaches.

Stories will begin popping up throughout the day and into the rest of July and August until we reach kickoff in Auburn, Ala., on September 3.

With that in mind, I listened in on some of the coaches’ interviews and came away with a few thoughts.

Brent Venables’ energy is unmatched. This isn’t breaking news, but it’s always great to watch Coach V interact with members of the local media. His segment with Roy Philpott and William Qualkinbush on WCCP was particularly representative of his energy level, and his enthusiasm comes off so well to listeners and bystanders. He described the freshman Boulware of three years ago as someone who “played loud, but didn’t know a thing.” After a quick laugh, he raved about the senior’s growth and noted he is ready to lead his linebacker corps in 2016.

“Kendall was our most productive linebacker in the spring,” he said. “What does that mean? I don’t know. He went out the very first day of fall camp (in 2015) with a shoulder injury. B.J. (Goodson) was a different guy when we started fall camp. He was a guy that maybe didn’t look the best in practice, but was a gamer. He played faster in games. It was the same with Kevin Dodd. So hopefully, Kendall can play close to that level. He’s shown me that he has the instincts, the tackling ability and that he’s coachable. He’s not perfect. But he’s been good, and he’s earned my trust.”

Venables said the 2016 defense has a premier talent at all three levels: Carlos Watkins on the defensive line, Boulware at the linebacker position and Cordrea Tankersley at cornerback. All three were named to All-ACC teams in 2015.

Brandon Streeter hit the nail on the head. One of the aspects of the Clemson program that doesn’t receive enough publicity from a national perspective is the camaraderie and continuity of the coaching staff. Streeter is the newest member of the staff, having joined for the bowl game in 2014 after Chard Morris’ departure. Six of Clemson’s coaches have been assistants since at least the 2011 season, when the Tigers began their stretch of 56 wins the last five seasons.

“This thing continues to move forward in a great way,” he said. “It’s all about the people, and it starts with our head coach and what he represents. The camaraderie of the staff has been amazing, and the players respond to it. We’re all on the same page. All of us are so excited about building on the success we’ve had.”

Streeter said Watson weighed in recently at 218 pounds, some 10 more than he did at this same juncture last summer.

“Our goal for Deshaun heading into camp is to weigh 215, and he’s ahead of that,” Streeter said. “He was 203 or 204, maybe, at the National Championship Game. He keeps coming back saying ‘Coach, I feel great and feel faster.’ Usually, when you get to preseason camp, it’s hard to gain weight. If he can maintain 215, we’ll be very pleased.”

Jeff Scott is glad to have No. 7 back. Mike Williams went down on the very first drive of Clemson’s 2015 season. The Tigers went on to go 14-1 and advance to the National Championship Game without a projected first-round wideout in their lineup. That’s a scary thought to opposing defensive coordinators.

“We thought Mike (Williams) was on track last year toward being one of those projected first-round draft picks who would have an opportunity to turn pro,” Scott said. “So it’s a blessing to have him back this year, and he’s looking great heading into camp. He weighed in at 223 pounds the other day. I still remember seeing him at Lake Marion High School at 175 pounds. But he had wide shoulders and you knew he could get there, with the frame he had. He’s trying for a really big year. His mindset is that he’s ready to get back on the field.”

Dan Brooks has one of the team’s best personalities in his group. Christian Wilkins, the enormous defensive tackle who fit in so well with the 2015 team, is always a talking point with members of the media. Brooks relayed a great story from this summer on Wilkins, who oozes with personality.

“Christian is a different guy,” Brooks said. “I ask all my guys to check in with me, and if I send them a text message or we change a meeting time, I want at least a letter response so I know they’ve got it and they’re okay. Usually, it’s simply ‘K’ or something like that. With Christian, he’ll respond ‘I’m on my way to the command center, see you soon Coach.’ But what a great young man he’s been for us.”

7:10 p.m. update – The golf tournament and dinner have both wrapped up, and Coach Swinney is addressing the local media inside the clubhouse of The Reserve. Congratulations to our team champions from today — Dwight Rainey, Robert Ricketts, Zach Lentz and Ryan Heil. Rainey, a former Clemson coach and administrator for many years, is no stranger to success in these events. Rainey added the “closest to the pin” title on the 16th hole to boot Tuesday. The longest drive belonged to Zach Alley of the football staff.

On preseason expectations:“No more pressure than normal. We’ve had a nice consistent run. We’ve been good enough to win it all, and I think we will be again this year.”

On Deshaun Watson:“He’s five hours short of graduating, after this summer session. You have to be incredibly driven and focused to achieve something like that. Especially when you consider the demands of the quarterback position at a place like Clemson. I’m not concerned about him being an All-American or winning the Heisman Trophy. That’s nice, but he wants to win. No one wants to win more than a Deshaun Watson, I promise you that.”

On overall depth:“We had some talent last year at defensive end, but didn’t have the competitive depth behind Shaq (Lawson) and Kevin (Dodd). This year, it’s a different situation. The competition will make us play more people. We didn’t rotate last year like we needed to; we had to make some practice adjustments and got lucky staying healthy at the position. By the Oklahoma game, Austin (Bryant) was ready to play. He showed up. It’s a bigger group, and we have more numbers this year that you need. It brings an edge to drills, practice, meetings — everything.

“I think the defensive end position may surprise some people out there. Xavier Kelly wasn’t here in the spring, but he’s a 265-pound kid that is strong, can run and change direction. Throw him in the mix with Bryant and (Richard) Yeargin, plus Clelin (Ferrell), and all of a sudden that group will carry its weight. It won’t take people long to identify No. 99 (Ferrell) on the field.”

On Auburn opener:“I remember how heartbreaking the locker room was in 2010, when we lost there in overtime. We missed Dwayne Allen wide open down the sideline for a touchdown that could’ve put the game away. Then the ball that outstretched Jaron Brown in the endzone. We had made a kick, and all of a sudden they threw a flag. I thought Auburn might have been offsides, so I was seriously contemplating going for a fourth-and-short. But it turned out it was on our snap. Then we missed it, went to overtime. That was the year we couldn’t kick at all. People were begging for us to go sign a kicker, so we did that. And then all Chandler Catanzaro did was leave as our all-time leading scorer three years later. It was a heck of a game, I do remember that.”

On linebacker Ben Boulware:“He’s a guy who’s a natural leader. He’s a LOUD leader. He’s loud in everything he does. He loves to hit and play the game. He plays with a chip on his shoulder. He hates to come out and be subbed. Those are the intangibles, that you don’t see, that make him such a great player. You can’t help but gravitate toward him.”