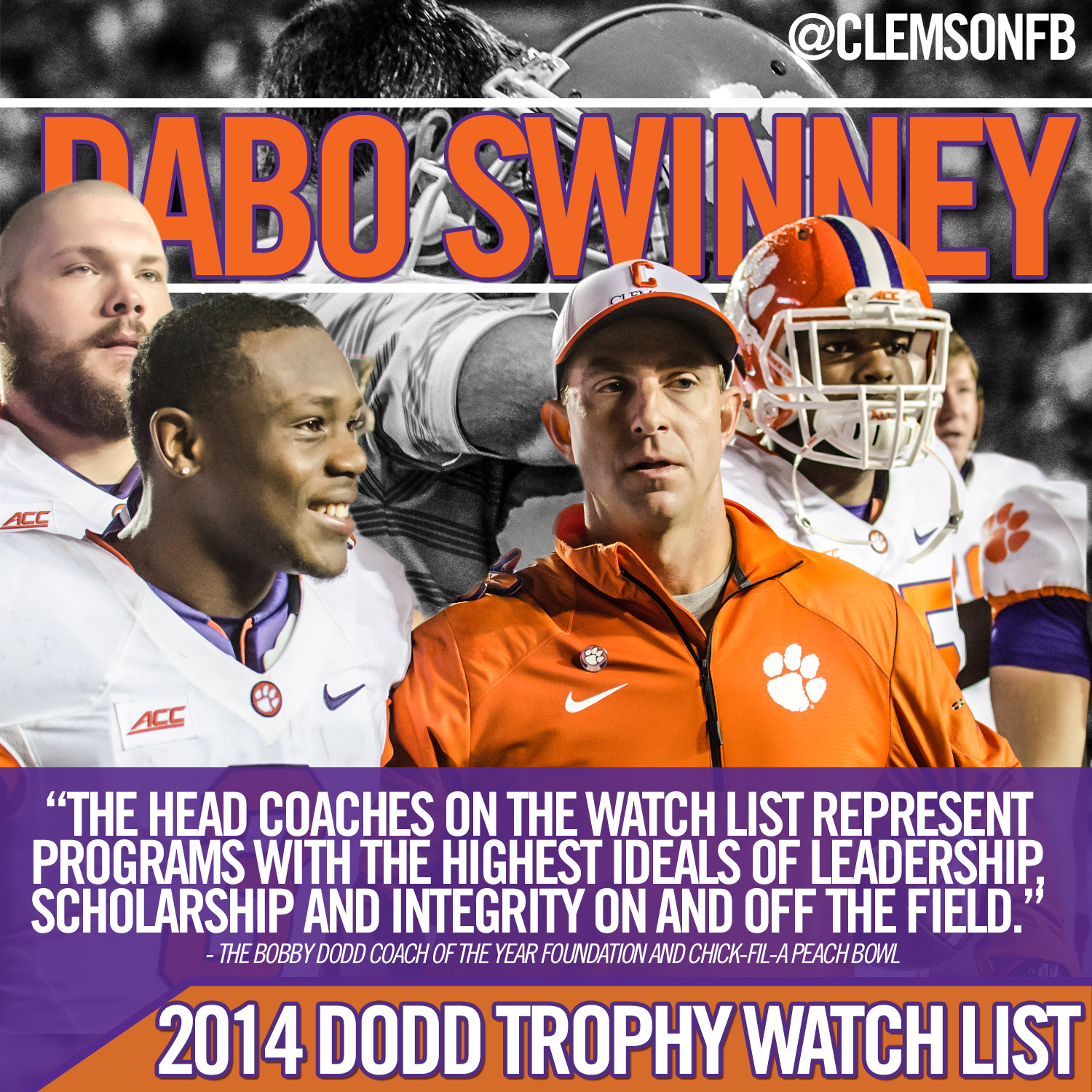 Atlanta, Ga.–  Clemson head football coach Dabo Swinney is one of 13 coaches included on the watch list for the 2014 Dodd Trophy, as announced by officials from the Bobby Dodd Coach of the Year Foundation and Chick-fil-A Peach Bowl on Friday.In his seven seasons at the helm of the Tigers, Dabo Swinney has led his teams to seven postseason bowl games. Swinney won The Dodd Trophy in 2011 after his 10-4 team won the ACC Championship and earned a trip to the Discover Orange Bowl.  His current senior class has a 38-10 record dating to 2011. The 2014 Clemson squad is currently 6-2 overall and 5-1 in the ACC, ranked in the top 25 of both polls and 21st in the College Football Playoff Poll. Academically, the Tigers rank among the top 10 percent of all FBS programs nationally in APR for the fourth consecutive year. The head coaches on the watch list represent programs with the highest ideals of leadership, scholarship and integrity on and off the field, the cornerstones of both legendary coach Bobby Dodd’s coaching philosophies and The Dodd Trophy Selection Committee. Swinney and David Cutcliffe of Duke are the only ACC coaches on the list. As the season continues, the watch list will be narrowed and released again in November. A panel consisting of all previous winners, national media pundits, a member of the Dodd family and one College Football Hall of Fame member will identify the final list of potential recipients at the conclusion of the 2014 season. The winner of The Dodd Trophy will be announced in Atlanta during Chick-fil-A Peach Bowl week. The list of coaches on the Dodd Watch List include David Cutcliffe of Duke, Mark Dantonio of Michigan State, Brian Kelly of Notre Dame, Gus Malzahn of Auburn, Urban Meyer of Ohio State, Jim Mora of UCLA, Dan Mullen of Mississippi State, Mark Richt of Georgia, Nick Saban of Alabama, Bill Snyder of Kansas State, Bob Stoops of Oklahoma, Dabo Swinney of Clemson and Kyle Whittingham of Utah.