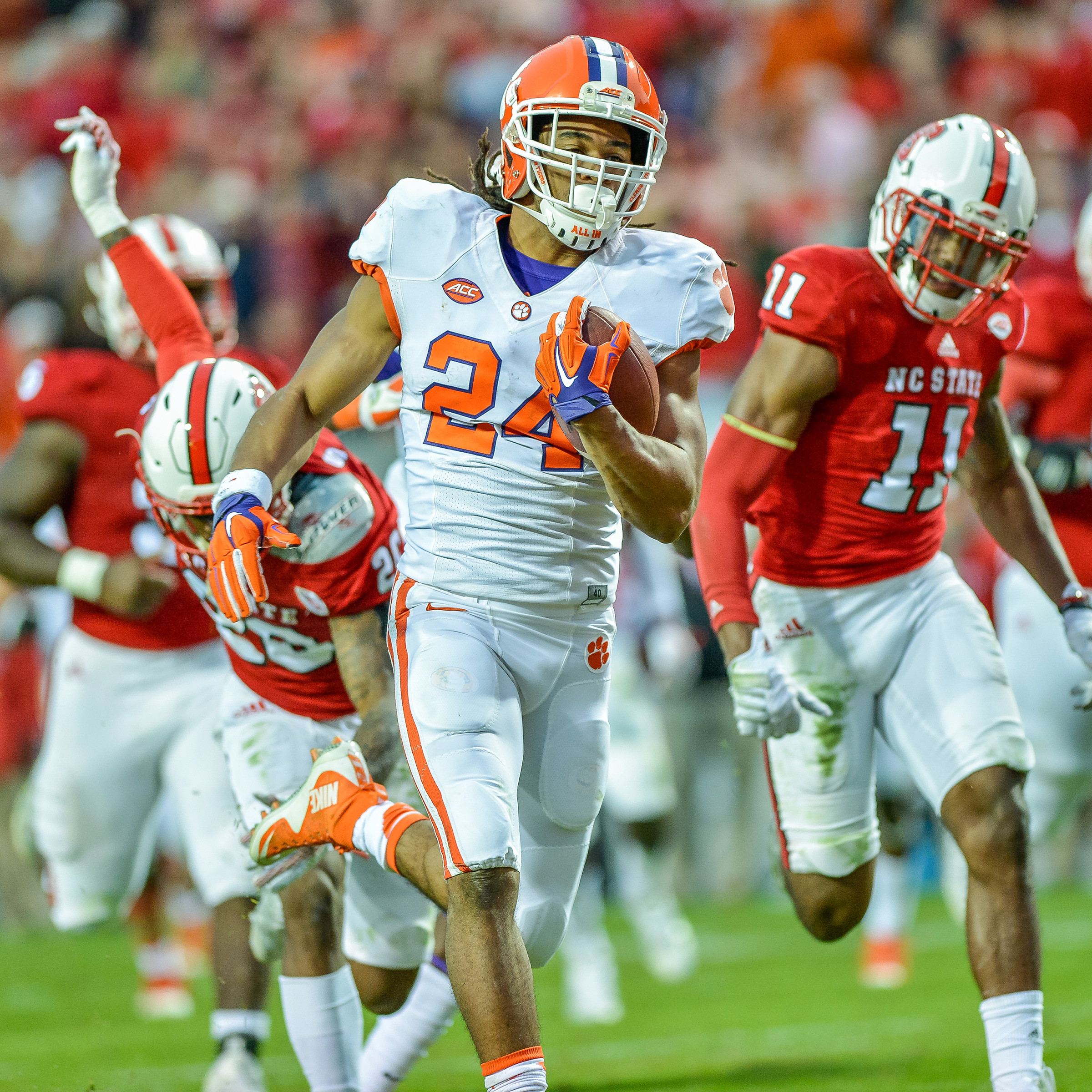 Senior running back Zac Brooks is no stranger to hard work. The Jonesboro, Ark., native has found his home at Clemson, and he cannot imagine himself anywhere else.

“It’s been awesome being here,” said #24. “I’ve grown so much as a person and a man. It’s been great to see guys come through and be successful. It’s motivating because it’s not something you see every day where I come from.”

Coming out of high school, Brooks was rated as the No. 1 player in Arkansas by Rivals. It was Clemson’s family-like atmosphere that drew him away from The Natural State.

“When I came to Clemson, I really liked the family atmosphere, because I’m a very family-oriented person. I know college football is a business, but you don’t have to make it a business in the locker room and in coaching meetings and with the staff.

He appreciates the support from the coaching staff, especially running backs coach and co-offensive coordinator Tony Elliott, who Brooks credits as one of many for supporting him through his rehab from various injuries.

“I see him more than anyone, so coach Elliott has done a great job in motivating me and keeping me in the right direction and letting me know that everything is going to be alright with all the injuries and stuff that I’ve been through. He’s always been there with some of the things he’s experienced. He’s been a great influence and a great coach.”

Brooks has certainly seen his share of ups and downs, as he had his time on the gridiron cut short due to injury and was forced to miss the entire 2014 season with a foot ailment. He was slated to be Clemson’s starting running back when the season opened. But Brooks never let his injuries beat him, and instead used them as a means to make himself stronger and better.

“I took it one day at a time, doing what I had to do to get back to where I wanted to be. I had my good days and obviously had my more painful days. But I loved the experience of coming back, knowing I’ve been through so much. So everything I get, I feel like I deserve since I worked hard for it. It’s great to reap the fruits.”

That ability to keep at it has paid dividends in 2015. He has a career-best 7.2 yards per carry figure and three touchdowns along with four receptions for 66 yards and two scores. He joins Artavis Scott as the only Tigers with a rushing touchdown and receiving touchdown.

Wayne Gallman is having an All-ACC season as the starting running back, but Brooks is doing his fair share as the second teamer, and the coaches have taken notice of his play on the field and his leadership attributes.

“Zac Brooks is a leader,” said head coach Dabo Swinney. “He’s a guy who all our guys have respect for because of all the injuries he has fought through. Our players have seen the best of Zac. He was going to be our starter last year and ‘bam,’ in August, he gets hurt and is out.

“He’s always had a great attitude and kept going. He sets a great example for his teammates and inspires his teammates. What people don’t know about Zac is that he is one of the best leaders we have on this football team. He has a vision of what he wants to be in the future. He’s going to be incredibly successful in life.”

“Even when he was hurt and couldn’t play, he was one of the best leaders on this team. He’s finally healthy and he’s gotten his confidence back. Hopefully, we can continue to see him blossom and reap the fruits of his labor.”

There were certainly tough times for Brooks during his rehab, and the toughest thing for him was not being on the field with the teammates he put in so many hours of work with.

“You have to stay motivated and dedicated to what you want to do. When you’re hurt like that and out for the season and you see all the guys you worked out with all offseason be successful, you can have your down moments because you want to be out there with them, and I felt like I should have been out there.

Despite the challenges he faced with rehab, Brooks has had his family there through it all, and his family’s presence was an invaluable tool for the running back, who knows that not everyone has the kind of family setup he has.

“The best times have been when I’m with my family. My family’s been with me every step of the way. They moved down here my sophomore year so that they could help me if I ever needed anything, and that’s still the case today.

“I can go home if I need something, and not every guy has that. That’s really special and I appreciate that. They’ve always been that way. They’ve always been there for me, encouraged me and had my back through thick and thin. And I love that. I’ve been blessed and put in a great position, and I’ve been looking forward to see what God has in store for me.”

Perhaps what has meant just as much to Brooks is not only the support he has received from the coaches and his family, but also the support from the Tiger fans.

“I’ve been feeling great. Every time I step on the field, my adrenaline gets going, and just being in Death Valley’s atmosphere is great.

“It’s an amazing feeling when you’re in Death Valley. The fans are awesome. I love our fans and they’ve had my back since I’ve been here. Nobody has strayed away, and I appreciate that. That’s loyalty, and you can’t find loyalty like you’ll find here at Clemson.

“I love that, so the least I can do is give them a show.”