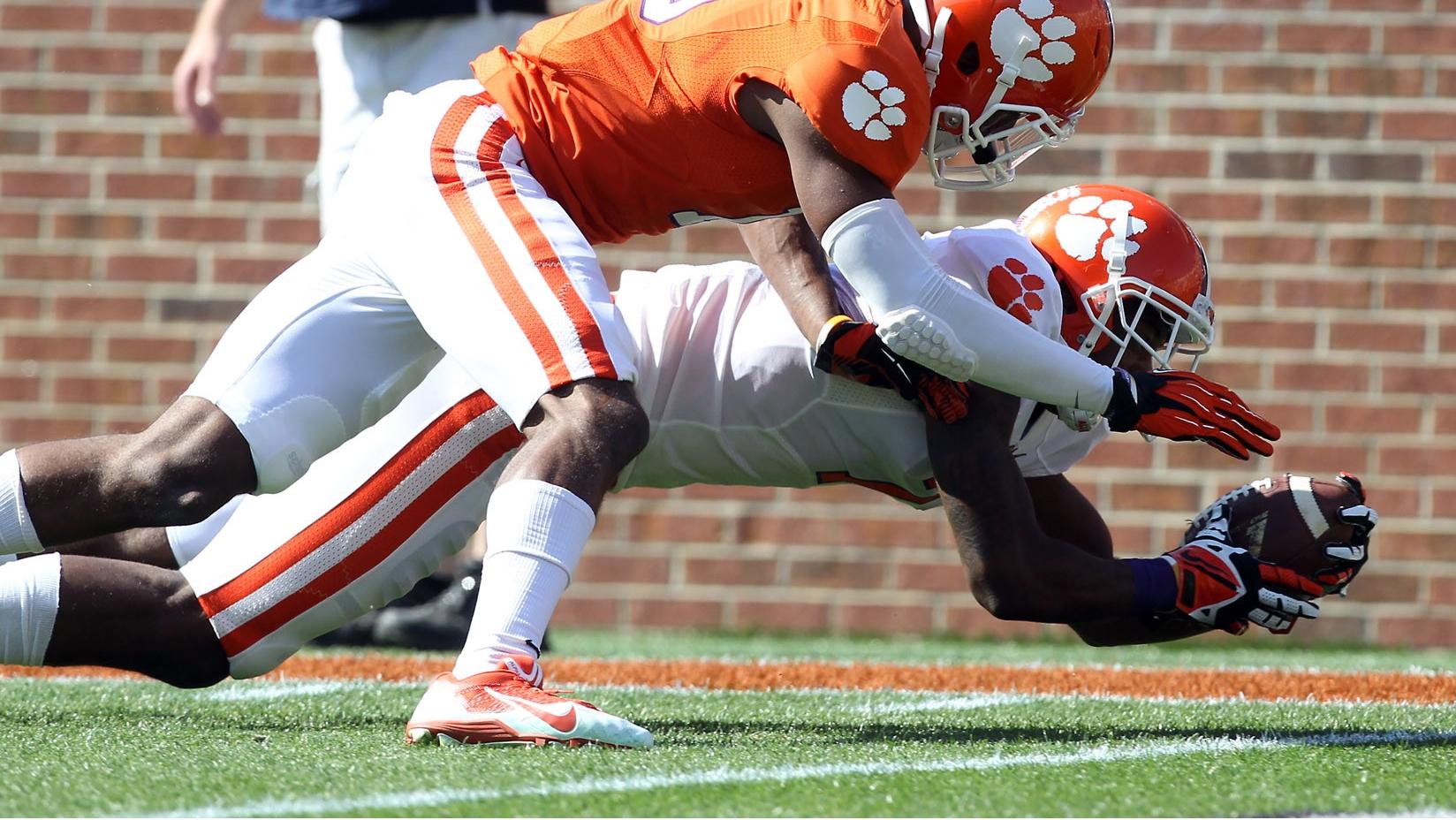 CLEMSON, S.C. – Senior quarterback Cole Stoudt threw for 158 yards and two scores and senior defensive end Tavaris Barnes recorded a Clemson Spring Game record five sacks to lead the White Squad to a 24-5 victory over the Orange Squad in the program’s annual Spring Game.  The contest completed spring practice for Dabo Swinney‘s Tigers, who have ranked in the top 10 of the final USA Today poll each of the last two years.

A Clemson Spring Game record crowd of 33,000 attended the game that was played in brilliant sunshine at Memorial Stadium.

Stoudt completed 15-23 passes for 158 yards and two scores for the White team.  One of the scores, a 16-yard touchdown pass, went to sophomore tight end Jordan Leggett, who led all receivers in the game with seven catches for 59 yards.  Mike Williams caught the other touchdown pass on a 28-yard aerial down the left sideline heading towards the East Endzone.

Stoudt was supported in the running game by senior D.J. Howard who had nine rushes for 59 yards, including a 13-yard score in the fourth period.  C.J. Davidson added 5-42 on the ground.

The White team defense did not allow a touchdown thanks to five sacks from Barnes.  It should be noted that quarterbacks were ruled down when merely touched by the defense so it was easier than a normal game to record a sack.  Ben Boulware led the White team with nine tackles, while red-shirt freshman Dorian O’Daniel added seven.  The White team had two interceptions, one by Garry Peters and one by Adrian Baker.

The Orange Team scored a safety in the second period when Howard was tackled in the endzone by linebacker B.J. Goodson.  The team’s other score came on a 39-yard field goal by Ammon Lakip late in the game.

Daniel Rodriguez was the top receiver for the Orange team with 5-53, including a 32-yard catch in the first half.  Adam Humphries had 3-39 receiving.  Wayne Gallman was the most productive player on offense for the Orange squad with 9-61 rushing and 2-28 receiving.  Kurt Fleming, a walk-on who has joined the Clemson program after a professional baseball career, had the longest play of the day with a 49-yard rush and finished with 3-55 on the ground altogether.

The Orange defense was led by defensive backs Ryan Carter and T.J. Green who had eight tackles apiece.  Green has moved to safety after lettering as a wide receiver last year.  Corey Crawford had the only turnover for the Orange defense with a fumble recovery.

“I first want to thank our crowd for creating a great atmosphere today,” said Head Coach Dabo Swinney.  “I saw some good things out there on both sides of the ball.  Wayne Gallman had a very good day.  He ran well and showed he can catch the ball and make some plays out of the backfield.  He can break tackles.

“Cole Stoudt had the best day of the quarterbacks.  He found his receivers and made the right calls.”

Freshman Deshaun Watson did not play due to a broken collarbone suffered earlier this week.  But he will return in good health in May and will be a part of the competition. Other players who missed the game due to injury were Charone Peake, Tyshon Dye, Marcus Bullard, Zach Riggs, Oliver Jones Travis Blanks, Martin Jenkins, Taylor Watson, Kellen Jones, Eric Mac Lain and Sam Cooper.

Clemson opens fall practice on July 31 and will open its season at Georgia on August 30.