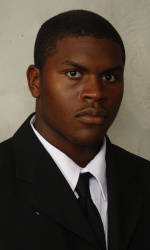 Stephone Anthony Out for Last Week of Spring Practice

CLEMSON, SC – Clemson linebacker Stephone Anthony will miss the last week of spring practice due to a finger injury. He suffered a torn ligament during practice earlier this week, that will require surgery. He will be ready for the fall.

Anthony started three games last year when he had 32 tackles and six tackles for loss. Anthony was a first-team USA Today All-American out of high school and figures to see significant playing time this coming year. He had two tackles for loss in the ACC Championship game win over Virginia Tech.

Sophomore defensive tackle DeShawn Williams suffered a sprained knee in practice last week. He will return to practice this week. Williams played 138 snaps as a true freshman and made one start. He finished the year with 20 tackles, two of which were tackles for loss. The son of former Clemson football player Ronald Williams (RB, 1990-92) had four tackles, including a tackle for loss in just 20 snaps in the ACC Championship game.

Clemson has four practices remaining and two of them will be scrimmages, this coming Monday afternoon, and the Spring Game on Saturday, April 14 at 4:00 PM. The Monday scrimmage is closed, but the Spring Game is obviously open to the public. There is no admission fee for the Spring Game.