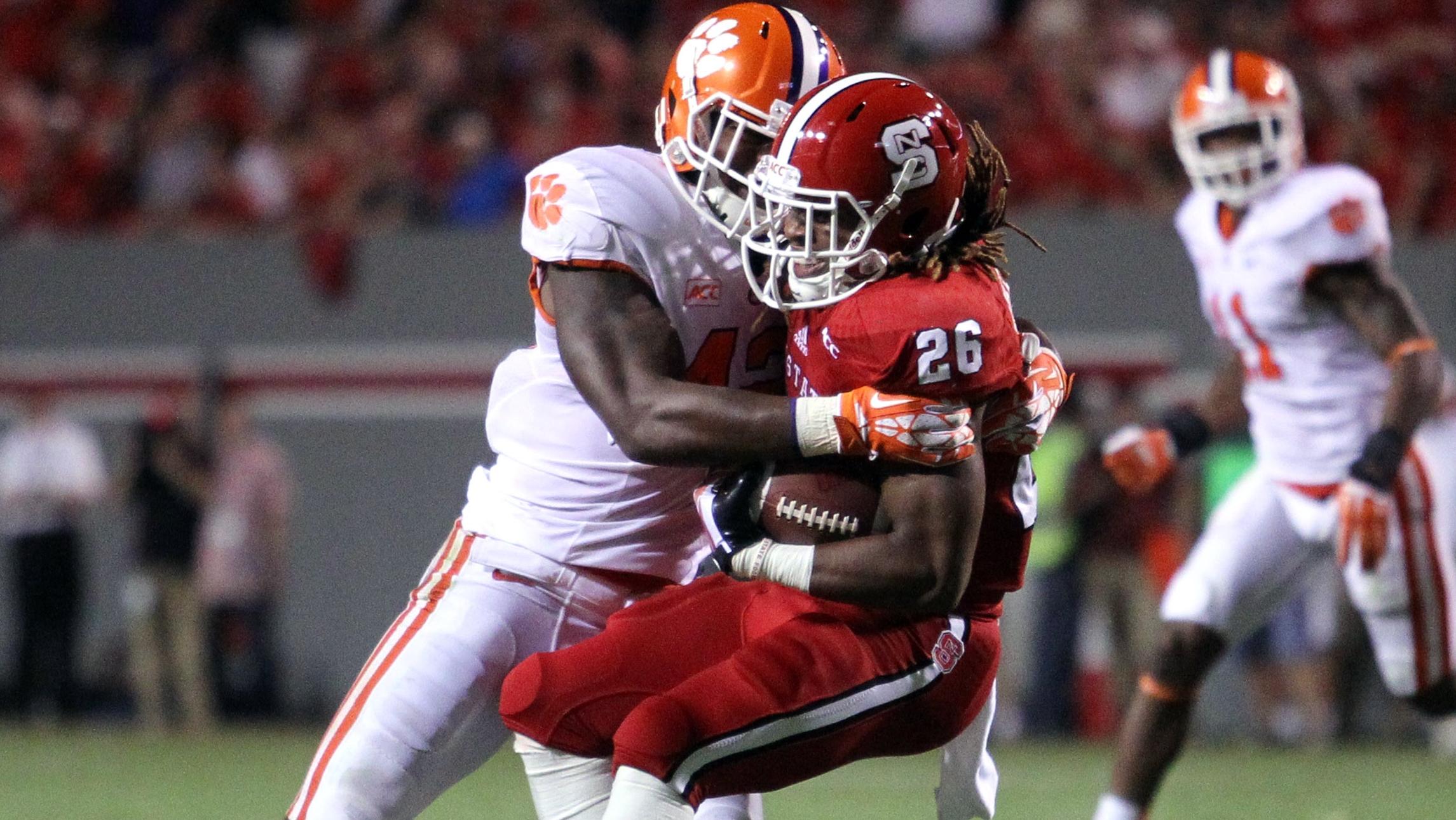 GREENSBORO, NC – Pitt quarterback Tom Savage has been named the Atlantic Coast Conference Offensive Back of the Week, and his two leading receivers, senior Devin Street and freshman Tyler Boyd, also earned weekly honors after the Panthers outscored Duke 58-55 for their first-ever  league win on Saturday.

Duke’s Jamison Crowder was honored as ACC Specialist of the Week after scoring three touchdowns – including one on an 82-yard punt return – in Saturday’s game, which featured the second-highest combined score by two teams in ACC history. Only Georgia Tech’s 68-50 win over North Carolina last season (118 total points) surpasses the 113 scored by Pitt and Duke this past weekend.

Savage is one of two national honorees earning ACC recognition this week. Maryland safety A.J. Hendy, the Walter Camp Foundation’s National Defensive Player of the Week, was named the ACC Defensive Back of the Week after returning an interception 28 yards for a touchdown and recovering two fumbles in the Terps’ 37-0 shutout of West Virginia.

Georgia Tech guard Shaq Mason was named the ACC Offensive Lineman of the Week for the second week in a row, while Clemson’s Vic Beasley and Wake Forest’s Nikita Whitlock earned ACC Co-Defensive Linemen of the Week honors. Clemson junior Stephone Anthony was recognized as the ACC Linebacker of the Week.

DEFENSIVE LINEMAN – Vic Beasley, Clemson, Jr., DE, 6-3, 225, Adairsville, Ga.Beasley had three sacks and five total tackles in Clemson’s win 26-14 Thursday night win over NC State.  It was the second consecutive year Beasley has recorded three sacks in a game against the Wolfpack, and one of his sacks changed the course of this year’s game. With NC State trailing by just 13-7 in the third period in Clemson territory at the 47, Beasley  registered a sack and caused a fumble, which was recovered by Clemson linebacker Spencer Shuey. The Tigers went on to score a touchdown on the next drive to go up 20-7.

LINEBACKER – Stephone Anthony, Clemson, Jr., LB, 6-2, 245, Polkton, N.C.Anthony led the Clemson defense in tackles with 14 in the Tigers’ 26-14 win in last Thursday night’s game at NC State. Anthony had six first hits and eight assists in recording his career high in tackles in his home state.  He also contributed two tackles for loss.

RECEIVER – Devin Street, Pitt, Sr., WR, 6-4, 195, Bethlehem, Pa.Street averaged an incredible 27.6 yards per catch and helped propel the Panthers to their highest point total since 1995 in the win at Duke. Street totaled six catches for a career-high 166 yards and two TDs. His touchdowns covered 67 and 21 yards, and he also provided a key block at the goal line to help teammate Tyler Boyd score on a 27-yard catch-and-run. Street is averaging an ACC-best 129 receiving yards per game (fourth in NCAA).

DEFENSIVE LINEMAN – Nikita Whitlock, Wake Forest, Sr., NG, 5-11, 250, Wylie, TexasWhitlock made a career-high 14 tackles in Wake Forest’s 25-11 win over Army, the most tackles by a Wake Forest defender since 2009.  Whitlock had seven solo stops and seven assists with three tackles for a loss of six yards. He was also credited with one forced fumble and one pass break-up. Army came into the game ranked seventh in the nation in rushing, and Whitlock led a defensive effort that held the Black Knights to 271 rushing yards, 43 yards below their average.

DEFENSIVE BACK – A.J. Hendy, Maryland, Sr., S, 6-0, 205, Bowie, Md.Hendy recovered two fumbles and returned an interception 28 yards for Maryland’s second touchdown in a 37-0 win over West Virginia. The interception was Hendy’s second of his career, both of which he has returned for touchdowns. Hendy and the Maryland defense forced six West Virginia turnovers and held the Mountaineers to 175 yards of total offense. It was the first shutout for the Terps since blanking Wake Forest on Oct. 18, 2008 (26-0), and their first shutout of West Virginia since defeating the Mountaineers 33-0 on Sept. 18, 1999.

SPECIALIST – Jamison Crowder, Duke, Jr., WR, 5-9, 175, Monroe, N.C.Crowder was named ACC Specialist of the Week for the second time this season following a three-touchdown day in the 58-55 loss to Pitt that included an 82-yard punt return for a score. Crowder became the first Blue Devil to score touchdowns via reception, rush and kick return since former wide receiver and current Duke associate head coach Scottie Montgomery did so against Wake Forest in 1999. Crowder finished Saturday’s game with 279 all-purpose yards (141 receiving, 109 punt returns and 29 rushing). The 279 total yards were the fifth-highest in school history, and the 82-yard punt return tied for the fifth-longest ever at Duke.