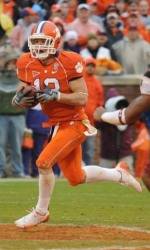 Grisham (5-11, 180) had spent the entire regular season on the Steelers’ practice squad after originally signing with the team as an undrafted rookie out of Clemson. Grisham caught 132 passes for 1,390 yards and eight touchdowns during his college career, but was among the Steelers’ final roster cuts during the preseason. He will wear uniform No. 19.