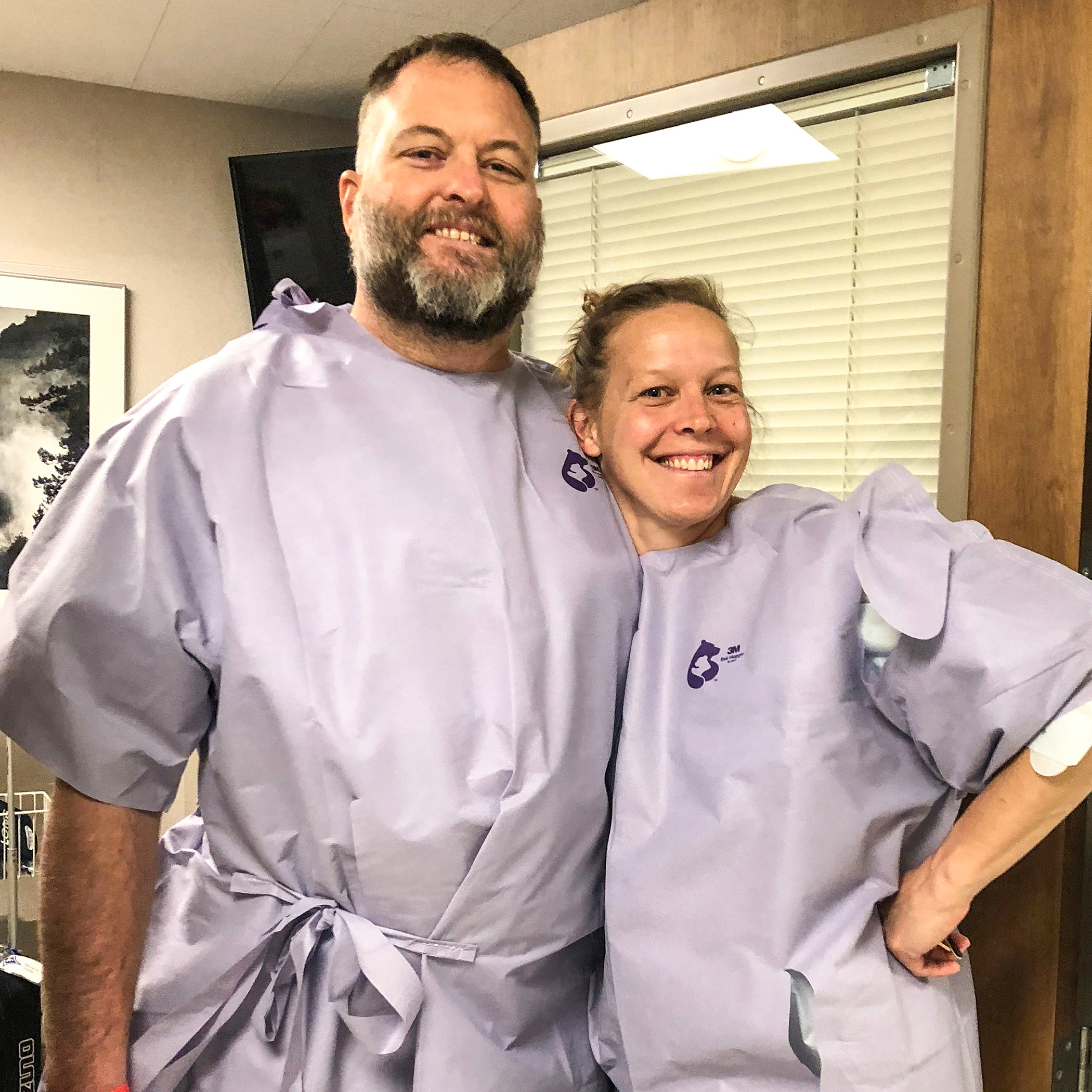 The story of two former Tiger student-athletes and husband-and-wife coaches who came together for a life-saving kidney transplant.

“What’s mine is yours.” “In sickness and in health.”

Two age-old marriage quotes describe perfectly what Will and Michelle Young, Clemson classes of 1996 and 1998, respectively, have gone through leading up to their 20th wedding anniversary.

Will is a Clemson man through and through. He sold programs inside Memorial Stadium as a local kid. His grandfather, Ed McLendon, played football for the Tigers. His father, Ron, and mother, Kathy, each graduated from Clemson. Will lettered as an offensive lineman from 1993-95, earning All-ACC honors in 1995. His brother, Kyle, followed in his footsteps and is the only three-time Academic All-American in Clemson football history.

Michelle (formerly known by the last name “Thieke”), on the other hand, had never heard of Clemson until her volleyball recruitment.

“I knew there was a Tiger Paw, and that was pretty much the extent of my knowledge. I came to Clemson because my goal was always to play at the highest level, and Clemson provided me that opportunity.

“I didn’t come because it was Clemson. Will, on the other hand, always knew he was going to Clemson. He had a lot more options than I did out of high school, but there was only really one option for him. He went to Clemson because of tradition.”

But once she made it down south, she left her mark. Michelle was a four-year letterwinner as a setter on the Tiger volleyball team. She set the school record for single-season assists (1,561) as well as the career mark (4,305). She was also named MVP at the 1997 ACC Tournament after leading the Tigers to the league title and the second NCAA Tournament of her tenure. Young was lauded with Second-Team All-ACC accolades in 1995 and was named to the AVCA All-District Team.

The two met in the weight room and realized they ran in the same circles and shared a group of friends. After a few years of dating, they married in the summer of 1998 in her hometown of Chatfield, Minn.

Fast forward to 2013. Will was in his ninth season as the head football coach at Greer (S.C.) High School, and she was in her 14th year at the helm of the Furman volleyball program. The two endured heartbreak, as Will’s mother passed away following her second kidney transplant.

Kathy had PKD, polycystic kidney disease, a chronic, genetic disease causing uncontrolled growth of cysts in the kidney, often leading to kidney failure, according to the PKD Foundation. Before she passed away, around 2008, Will found out that he, too, had PKD.

“Even after I realized I had PKD, I thought I could hold off dialysis. For the past seven or eight years, I’ve been trying to keep my creatinine down, but at some point, there’s not much you can do about it.”

“Five years ago, we knew this was going to come at some point,” said Michelle. “We were going to ride it out until he was either going to go on dialysis or could get a transplant. We were trying to time it up, because they tell you to get as much out of the native kidneys as possible, and we didn’t want to do dialysis.”

In 2016, Will received an evaluation at the Augusta (Ga.) University Medical Center. The Youngs thought they were going to be prepping for a transplant, but the doctors said they could hold off because Will felt great. But the possibility of the procedure was still looming.

Then in December 2017, the inevitable could no longer be avoided. Another evaluation had revealed that his kidneys were functioning at only eight percent. His first option for a donor, Michelle, matched and the surgery was scheduled.

“The recipient’s insurance covers a donor, but I couldn’t get evaluated until Will was approved for the transplant,” stated Michelle. “There’s no expense to the donor, which is why everyone should donate, but there are some timing issues. As soon as he got the ‘yes, we will do a transplant’ news, I went up for a three-day evaluation. It took a week to find out whether or not I was a match, because they mix your blood up and see how they get along.

“Everyone felt pretty confident that it was going to work because I’m the universal donor blood type, and there were a few other boxes that I already had checked. I already knew I wanted to be the donor, so I had been working out and taking care of my body. We felt pretty good about it going into my evaluation.”

Will traveled to the Mayo Clinic in Rochester, Minn., in December to meet with doctors. Michelle traveled there in February and found out she was approved. Then in March, an appointment was set, and they were having the surgeries.

On surgery day, the Youngs (and their “caregiver”, Michelle’s sister) went in together to the pre-op. Their rooms were across the hall from each another, and the pair convinced the staff to let them hang out together until it was time to head back to surgery.

“We were in the prep together,” recalled Michelle. “We were chatting, hanging out, waiting, and when it was time to head back to surgery, I rolled by him and said, ‘see you on the other side!’”

After the successful surgeries, both of their competitive sides kicked in and the two raced to see who would “suck it up and get out of the bed first” to walk across the hall and see the other. The pair stayed in the hospital for the weekend, but then stayed a week and a half in the Mayo Clinic’s “Gift of Life House,” which serves as a place for transplant patients to begin their recovery.

Through all of this, the couple said their goal was to make it a positive, family effort.

And what a #ClemsonFamily effort it was.

The Young family would like to encourage people to look into being a donor! Anyone who is interested can visit UNOS.org for more information.