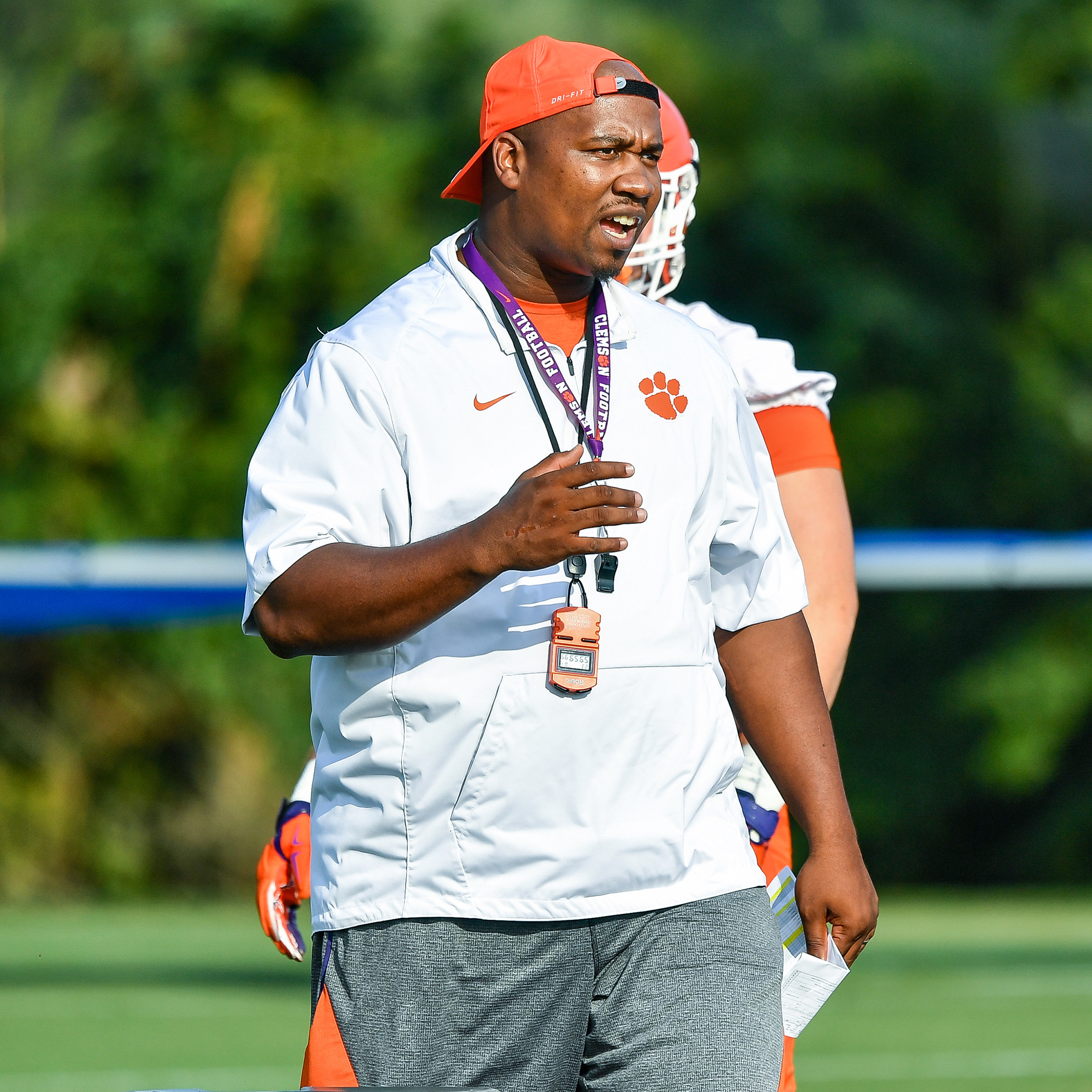 The Dabo Swinney Football Camps, held each June, attract a large number of attendees. Youth from all over the nation converge on Tigertown to gain knowledge and skills that will make them better players for years to come.

There are many youngsters who camp at Clemson and will one day wear orange & purple on Saturdays. The opportunity to show their skills allows Tiger coaches to see a young man from an early age and track his success as he goes through his high school career.

New Clemson defensive line coach Todd Bates was never a camper at Clemson during his playing days. But the former Alabama Crimson Tide product and defensive end for the Tennessee Titans can thank his work as a teacher/coach at Swinney’s camp as one of the reasons for where he is today.

When associate head coach Dan Brooks retired following Clemson’s national championship victory over Alabama in January, a name that rose to the top of Swinney’s list was Bates. One of the reasons, ironically, was what Brooks told Swinney at a camp session years ago.

“Todd has worked our camps in recent years,” recalled Swinney. “I remember one of the camp days, coach Brooks came to me and said, ‘Todd Bates is the best coach we have out here. I have been following his career closely.’”

Bates’ resumé at Jacksonville State (combined with a two-year stint on the sidelines at Idaho State) certainly made him an attractive candidate when Swinney had to replace both Brooks, who retired after 400+ games as an assistant coach at the college level, and Marion Hobby, who moved up the coaching ladder to an assistant position with the Jacksonville Jaguars.

During his three years at Jacksonville State, Bates and the Gamecocks were 33-6, including 23-0 in Ohio Valley Conference contests. They reached the FCS National Championship Game in 2015. In 2014, Jacksonville State allowed a league-best 128 yards per game on the ground.

Bates, who lettered at Alabama three times and was named a permanent team captain for the Crimson Tide in 2004, began working the Dabo Swinney Football Camps after he joined Jacksonville State as a defensive line coach in 2014. The opportunity to see how Clemson coaches create a culture of success was something Bates had his eyes on from a distance.

“The first thing I noticed is you have a head coach in coach Swinney who really cares about every player in his camp,” said Bates. “He would be out there working as hard as any coach on the field to impart wisdom on every player he came in contact with. How can you not be impressed with such a work ethic?”

After spending time at Clemson during camp weeks, Bates could not help but think about one day coaching at Clemson. When Swinney contacted him, it was an easy decision for the Heflin, Ala., native.

“Clemson is a place that you dream about,” explained Bates. “It is like a plant that is put in good soil and grows up strong. As a coach or player, you are nurtured and have an opportunity to grow.

“Everyone in this football program is challenged and held accountable. Coach Swinney along with coach (Brent) Venables and everyone at Clemson expects the very best. ‘Best is the Standard’ is not just a saying, it is a way of life.”

Bates is the first Tiger coach to lead all four defensive lineman positions since Ron West in 2004 and just the second since 1998. He understands that having a veteran group, led by the likes of Christian Wilkins, Dexter Lawrence, Austin Bryant and Clelin Ferrell, aids in the transition.

“The leadership displayed by all those veterans really shortens the learning curve,” added Bates. “The younger guys see how self-driven the older guys are. You don’t have to tell them to put in extra work. Our older guys have been to the highest level and want to bring the younger ones with them.”