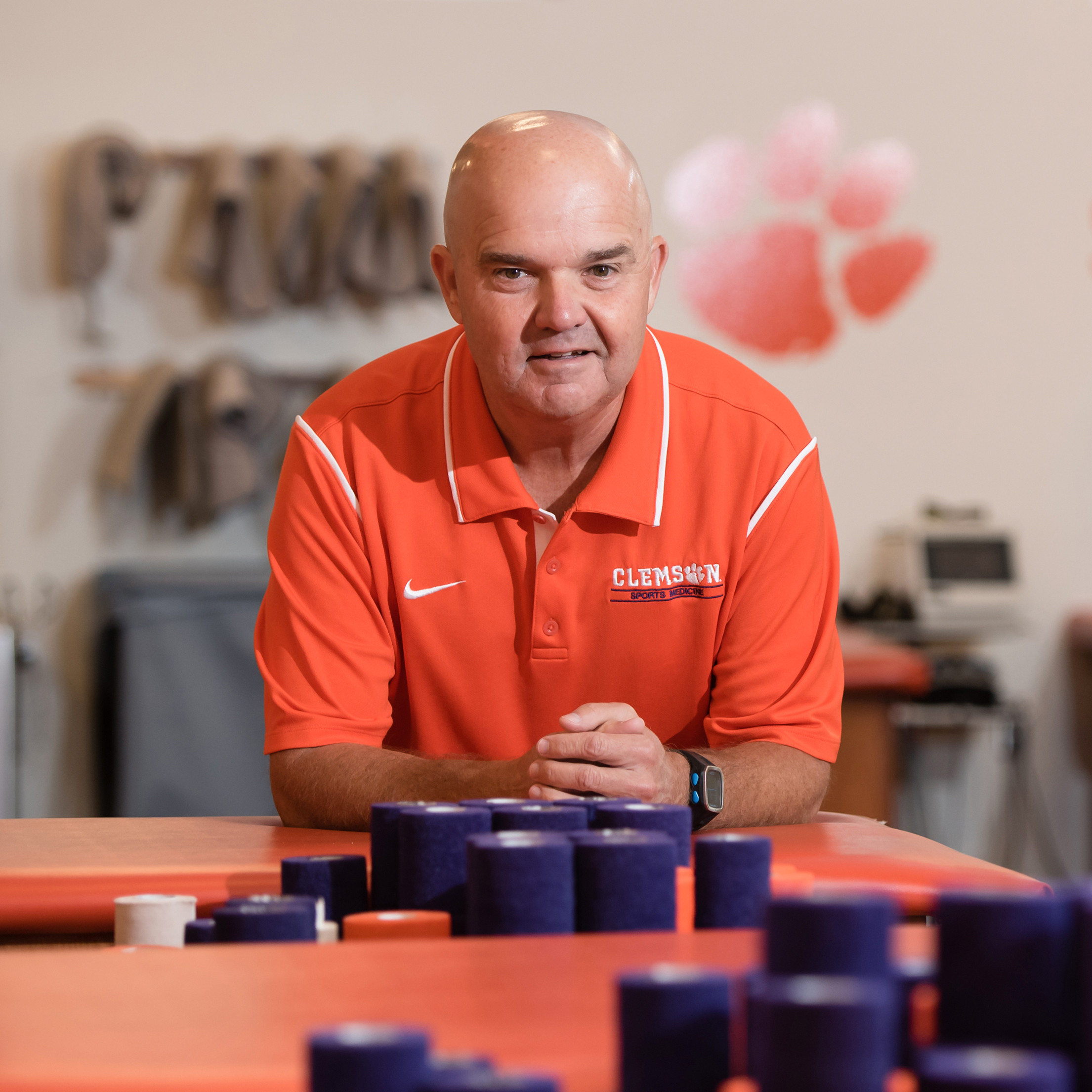 It all started for Danny Poole when he received a Cramer Coach’s Team First Aid Kit notebook course just as he was finishing the ninth grade, his final year of junior high before attending West Mecklenburg High School in Charlotte, N.C.

Poole had played sports through junior high school, but when he became a sophomore, he realized he had a deep interest in athletic training. The more he read, the more he became interested.

“After I took that course, I went to a few clinics,” said Poole. “I went to one in Greensboro that was in association with the North Carolina High School Coaches Association and got even more interested in it.”

It just so happened that one of the guest lecturers at that Greensboro clinic was Clemson athletic trainer Fred Hoover, a legend in the profession who would go on to be Poole’s boss a decade later.

“I did it all for all three years of high school,” said Poole. “We had a doctor at each football game, but when it came to the everyday taping of ankles and basic rehab of injuries, I was the primary one.”

As a senior in the fall of 1974, he was given the opportunity to work the Shrine Bowl in Charlotte, the first student athletic trainer asked to work the game. It seems he was regarded as a five-star among student trainers in the state of North Carolina.

In an odd twist of fate, the native of North Carolina was assigned to the South Carolina team. One of the players on that South Carolina team was a quarterback from Spartanburg High School name Steve Fuller, who would go on to be the first Tiger football player to have his number retired.

During his senior year of high school, Poole applied to colleges that had a curriculum geared towards athletic training. He knew at this early age what he wanted to do for his life’s work.

“Appalachian State had a program, so I applied and was accepted with a scholarship,” recalled Poole. “But in June of 1975, I got a letter that there was no scholarship money available.”

A few months before the start of the academic year, Poole was searching for a new school and hopefully some scholarship money. Fortunately, a coach at his high school knew Western Carolina football coach Bob Waters, and he called him to recommend Poole. It did not take long for Waters to become impressed with Poole’s work experience and he offered him a scholarship to work with his squad.

Poole worked for four years as a student athletic trainer at Western Carolina. During that time, he supervised the rehabilitation of a football player named Dan Brooks, who had just finished his playing career. That same Dan Brooks is now the defensive line coach of the Tigers.

Poole worked more than just football games, and that work ethic led to him finding the love of his life. One day he was at a women’s basketball game and Catamount guard Beth Morgan fell to the floor in pain after a collision with an opposing player.

Poole went out on the court to check on Morgan and her injury.

“That was the first time I met Beth. It was a dislocated shoulder.”

A few rehab sessions later, they started dating and have now been married for 33 years. Morgan was a two-sport athlete at Western Carolina (women’s basketball, tennis).

“Beth follows all sports closer than I do,” Danny admitted with a smile.

Professionally, Poole has had a wonderful experience…but, his family is his “rock.” The couple has two daughters who married young men and made the family grow. Jacqui and Greg Rice gave them a granddaughter, Finley. Abby and her husband, Andrew White, are expecting their first child, Skylar, in November.

After four years as a student athletic trainer at Western Carolina, Poole was hired straight out of college by Memphis. He earned his master’s degree while there in 1983.

Then in the fall of 1983, Fred Hoover was looking for a replacement for assistant athletic trainer Larry Sutton, who had passed away suddenly from pancreatic cancer.

“When I interviewed with Fred, we talked about that clinic in Greensboro in 1974. It was a good interview and he offered me the job. Fred was a good boss who taught me a lot about work ethic.”

So Poole started at Clemson in January 1984 as Hoover’s top assistant working with football. He worked his first football game on Sept. 1, 1984. The Tigers defeated Appalachian State 40-7, a bit of irony for Poole in that his college career as a student athletic trainer was supposed to start there nine years earlier.

Poole is in his 33rd season at Clemson and has never missed a game, that’s 399 games entering the Louisville contest on October 1. He has been on the athletic training staff for 27 bowl teams, 17 squads that finished in the top 25 and six ACC championship teams.

But if you ask him about his career, it is about the relationships he has formed with the players and his student athletic trainers.

One of Poole’s favorite stories involved current quarterbacks coach Brandon Streeter, who played for the Tigers from 1996-99. Streeter went through so many injuries and rehabs that the athletic department created a department-wide award in his honor.

In 1999, Streeter fractured a collarbone at NC State. He missed the next two games and then made the trip to Wake Forest as an emergency backup.

“We told coach (Tommy) Bowden he could play in an emergency, but don’t ask him to run the ball. Woody Dantzler was having trouble getting us in the endzone, so coach Bowden asked if Brandon was available.”

By now, it was the fourth quarter and Clemson was leading 5-3.

“Coach put Brandon in the game and he led us down the field. We got to the one yard line, and on third down, coach called a quarterback sneak. Brandon got it in there, but I held my breath.

“The way Brandon was able to recover from injuries was amazing. He could fight through them. I’ve always felt he was not from this planet.”

Perhaps the most rewarding aspects of Poole’s long tenure at Clemson has been watching his former students move into the profession. Jeff Ferguson was a student athletic trainer from 1989-93 and is now in his 11th year with the San Francisco 49ers, including his fourth as vice president of football operations.

“It is gratifying to see your former students advance in the profession,” added Poole. “I had a lot of people help me when I started, and now I have the opportunity to help the students today.”