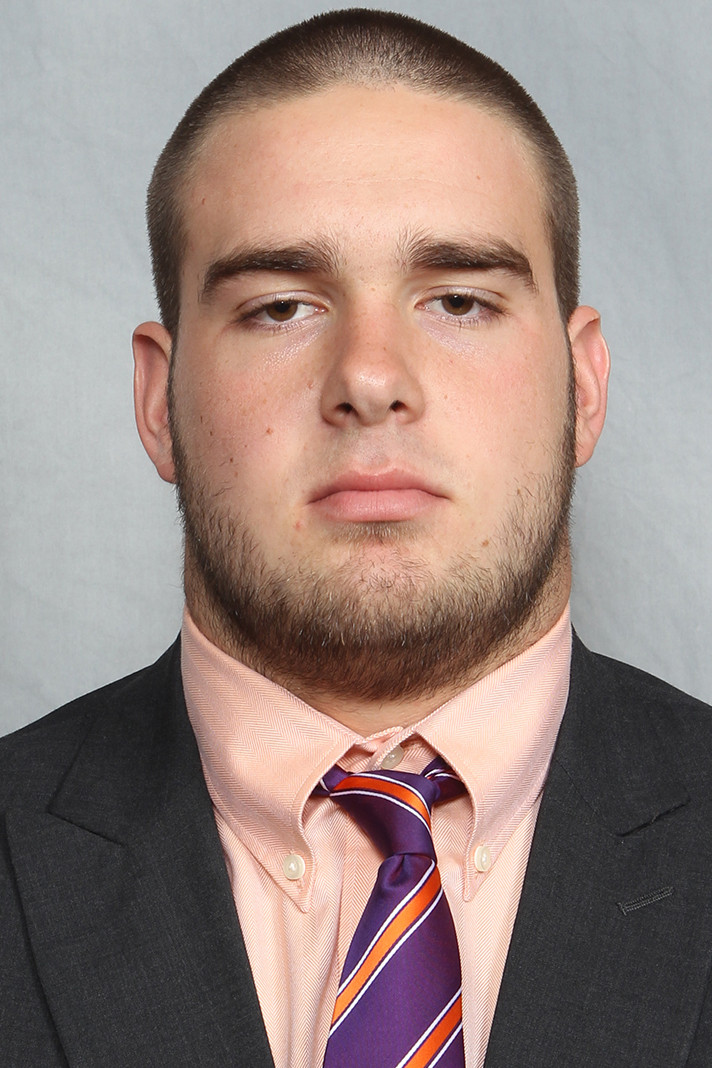 Two-year starter at center and two-time All-ACC Academic selection who exemplified the term “student-athlete,” earning his MBA in a program an hour away from campus while starting for the undefeated national champions in 2018 … played 2,032 snaps over 52 games (28 starts) in his career … earned ACC Honor Roll selections in all five years of his collegiate career.

2018: Second-team All-ACC … second-team AP All-ACC … earned second career All-ACC Academic selection … played 803 snaps in 14 games (all starts) … played 41 snaps in helping the offense gain 531 yards of offense vs. Furman … played 59 snaps and helped the offense gain 413 yards in a start at Texas A&M … in 38 snaps, helped the offense gain 286 rushing yards and 309 passing yards in a start vs. Georgia Southern … helped Clemson once again eclipse 200 yards both rushing and passing in a start at Georgia Tech, appearing in 41 snaps … played 75 snaps in a start in a comeback win vs. Syracuse, helping power the Tigers on a 13-play, 94-yard game-winning drive … played 45 snaps in helping Clemson accrue 698 yards and a then-school-record 11.8 yards per carry at Wake Forest, resulting in the entire offensive line earning team offensive player of the game honors … played 63 snaps in helping Clemson accrue 471 yards of offense against No. 16 NC State … missed the contest at Florida State with a concussion, but returned the following week to play 33 snaps in helping Clemson set school records in yards per play (11.6) and yards per carry (13.3) vs. Louisville, resulting in the offensive line’s second collective selection as offensive player of the game … played 69 snaps in Clemson’s Atlantic Division-clinching win at No. 17 Boston College … played 64 snaps as Clemson eclipsed 200 passing yards and 200 rushing yards vs. Duke … earned first career ACC Offensive Lineman of the Week honors vs. South Carolina as he played 91 snaps in helping guide Clemson to 744 total yards, the third-highest total in school history … played 54 snaps in ACC Championship Game victory against Pittsburgh … played 68 snaps as Clemson passed for 327 yards and rushed for 211 yards vs. No. 3 Notre Dame in the Cotton Bowl … played 62 snaps in a National Championship Game victory against No. 1 Alabama.

2016: Had four knockdown blocks in 174 snaps over 11 games … appeared in the Troy win for 23 snaps, posting an 83 percent grade with a pair of knockdowns … played 32 snaps against SC State … logged 18 snaps in win over Georgia Tech … played 17 snaps at Boston College, with a 94 percent grade … logged eight snaps in 37-34 win at Florida State … played 23 snaps against Syracuse, grading out at 87 percent … graded 90 percent in 30 quality snaps against South Carolina.

Before Clemson: Rated as the No. 12 player in Maryland by Rivals.com … No. 16 player in Maryland by 247Sports.com … three-time all-state selection … consensus first-team all-state as a junior and senior, and first-team all-state as a defensive lineman as a sophomore … member of the state championship team as a sophomore, junior and senior; his team was 41-1 in his three years as a starter, winning each of the last 36 games; also played as a freshman on a team that reached state championship game … played on both sides of the ball as a starter each of his last three years … had 108 career tackles, including 42 as a junior … outstanding lacrosse player who lettered four times … National Honor Society member, Maryland Scholar and an APEX Scholar … coached by Kevin Lynott at Middletown High School … recruited by Brent Venables.

Personal: His father, David, played football for one season at Notre Dame … his brother, Shane, attended Maryland on an academic scholarship (engineering) … graduated with a degree in management in August 2017 and added a Master’s degree in December 2018 … born Sept. 18, 1995.