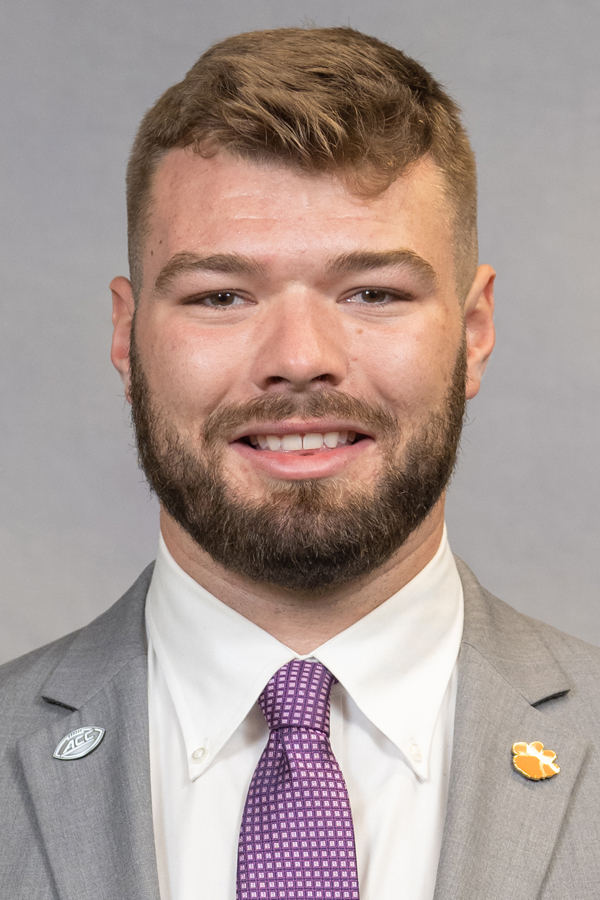 Two-year team captain who completed his decorated six-year career spanning 2016-21 credited with 310 career tackles (20.5 tackles for loss), 10.0 sacks, 12 pass breakups, two fumble recoveries (including one he returned 17 yards for a touchdown) and a forced fumble in 1,920 snaps over 69 games (38 starts) … his 69 career games played tied for the school and modern FBS record … is the only player ever to play in (and win) five ACC Championship Games … at the conclusion of his career, was one of only 20 players in school history to earn at least three All-ACC Academic Team selections.

2021: First-team All-ACC selection … also collected first-team all-conference honors from the AP and Phil Steele … named a third-team All-American by Phil Steele … voted as a permanent team captain … All-ACC Academic Team selection … finished with a team-high 100 tackles as credited by the coaching staff, recording 4.5 tackles for loss, 2.5 sacks and six pass breakups over 698 snaps in 13 games (all starts) … was the only defensive player — and one of only four offensive or defensive players — to start all 13 games for Clemson … led Clemson with 14 tackles vs. No. 5 Georgia, sharing team defensive player of the game honors and earning ACC Linebacker of the Week … added four tackles (one for loss) vs. SC State, sharing team defensive player of the game honors … credited with nine tackles and a pass breakup vs. Georgia Tech and made the stop on a fourth-and-goal goal line stand on a shovel pass in the final minute … recorded four tackles at NC State prior to exiting the game in the first half with an injury … credited by the coaching staff with 10 tackles and added two pass breakups vs. Boston College … notched eight tackles, a pass breakup and a half-sack at Syracuse … named ACC Co-Linebacker of the Week and shared defensive player of the game honors after he recorded a career-high 18 tackles at No. 23 Pitt, one shy of Baylon Spector’s record for the most in a game under Dabo Swinney … made seven tackles vs. Florida State … credited with eight tackles (1.5 for loss), a pass breakup and a sack on the game-clinching goal-line stand at Louisville … added four tackles vs. UConn … recorded five tackles (1.5 for loss) with a sack vs. No. 13 Wake Forest … contributed six tackles and a pass breakup at South Carolina … recorded three tackles vs. Iowa State before exiting in the first half with an injury.

2020: Second-team All-ACC honoree … also earned second-team all-conference nod from PFF … voted as a permanent team captain … NSCA Strength and Conditioning All-American … credited with 44 tackles (3.5 for loss), 1.5 sacks, two pass breakups and a fumble recovery he returned 17 yards for a touchdown in 291 snaps over nine games (eight starts) … recorded three tackles (one for loss) and a pass breakup in one half of play at Wake Forest … scored first career touchdown on a 17-yard fumble return and added two tackles vs. The Citadel, collecting team defensive player of the game honors … credited by the coaching staff with 13 tackles and a pass breakup vs. Virginia … credited with five tackles including a half-sack vs. No. 7 Miami, sharing team defensive player of the game honors … contributed four tackles at Georgia Tech … missed three games over five weeks but returned to action vs. Pitt, contributing six tackles (one for loss) … made one tackle in limited action at Virginia Tech … posted five tackles and a sack in ACC Championship Game vs. No. 2 Notre Dame … added five tackles vs. No. 3 Ohio State in the Sugar Bowl.

2019: Finished second on the team with 105 tackles (7.5 for loss), 4.5 sacks, four pass breakups, a forced fumble and a fumble recovery in 699 snaps over 15 games (all starts) … All-ACC Academic selection … recorded eight tackles (0.5 for loss), a half-sack and a pass broken up vs. Georgia Tech … added three tackles and a fumble recovery vs. No. 12 Texas A&M … posted seven tackles including a career-high 1.5 sacks at Syracuse … led Clemson with nine tackles and shared team defensive player of the game honors vs. Charlotte … recorded seven tackles (one for loss) and a pass breakup and contributed to the game-winning stop on a two-point conversion attempt at North Carolina … contributed five tackles vs. Florida State … credited with a team-high 10 tackles including a sack at Louisville … added six tackles against both Boston College and Wofford … recorded six tackles (two for loss) and a pass breakup at NC State, sharing team defensive player of the game honors … led team with eight tackles vs. Wake Forest … added five tackles at South Carolina … led Clemson with 10 tackles vs. No. 22 Virginia in ACC Championship Game and also shared team special teams player of the game honors … contributed a half-sack among his nine tackles in the Fiesta Bowl vs. No. 2 Ohio State … posted six tackles, a sack and a pass breakup vs. No. 1 LSU.

2018: Played 38 snaps over four games while redshirting, recording 10 tackles (1.0 for loss) … recorded six tackles, including one for loss, at Georgia Tech as starting linebacker Kendall Joseph missed the contest with an injury … posted two tackles against Pitt … added two tackles in National Championship Game vs. No. 1 Alabama.

2016: Produced 14 tackles in 20 snaps in 14 games … more than half (eight) of his tackles came on special teams … appeared in first collegiate game at Auburn, registering a tackle … special teams player of the game against Boston College, he had a tackle on kickoff coverage … had four tackles, including two on special teams and one for loss, in nine active snaps against Syracuse … tallied special teams stop at Wake Forest … had two tackles on special teams in win over South Carolina … assisted on a coverage tackle in the Fiesta Bowl win over Ohio State.

Before Clemson: Outstanding all-around athlete … standout on the football field and the soccer field … will leave Northgate High as the school’s most decorated athlete … named first-team all-state as a linebacker and second-team all-state as a punter … Region 4-AAAAA Defensive Player of the Year … named the MVP of the Newnan area … led the team in tackles with 170, 33 of which were tackles for loss … had 11 sacks, three caused fumbles, two caused fumbles and an interception … had a pair of defensive touchdowns as well … handled the punts and had over a 40-yard average … also handled kickoffs and was second-team all-region kicker as well … also running back at times for Northgate team that finished 12-2, most wins in school history … also a three-year starter in soccer … actually played football and soccer at the same time during the fall of 2013 … played his high school football for Tommy Walburn … selected Clemson over offers from Louisville and South Carolina … recruited by Mike Reed and Brent Venables.