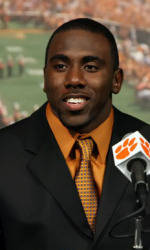 Spiller to Return to Clemson

Clemson, SC — Clemson first-team All-ACC player C.J. Spiller announced on Thursday that he will remain at the school to play his senior year. Spiller had considered turning professional since the end of the 2008 season, but announced his decision at a press conference attended by half the Clemson football team in addition to many media members.

“I spoke with a lot of people about this decision and took my time in evaluating all the factors, but the best decision for me is to play the 2009 football season at Clemson University,” said Spiller in a room that erupted with applause after the statement. “I didn’t want to leave Clemson University with any regrets. I still have much to accomplish. I prayed about this decision for several days. But, at the end of the day you have to be a peace with your decision when you lay in bed. I wanted to go back to Clemson. I was just my gut feeling.

“It is also important to me that I get my degree. I can finish by next December and that is important. I want to set an example for the other young players in this program and the ones that will be coming to this program in the future.”

Spiller had 629 yards rushing and 436 yards receiving in 2008, giving him 1065 yards from scrimmage for the season. He was second in the ACC in kickoff returns, second in punt returns in addition to his number-one ranking in all-purpose yardage. He was named an honorable mention All-American all-purpose player by Si.com and Pro Football Weekly for 2008.

Spiller also stood out in the classroom this year and made the Dean’s List for the fall semester. He is the first running back in Clemson history to make the Dean’s List and first-team All-ACC in the same year.

“I am obviously thrilled that C.J. Spiller will be returning to Clemson next year,” said Clemson Head Coach Dabo Swinney, who recruited Spiller out of high school. “It was just like the day he signed with us three years ago. There was a lot of anticipation in what he would decide.

“I really feel this is the best decision for C.J. He will be our featured player in our offense next year. I am anxious to see what he can do in that role. He is a back who can rush for 1000 and get another 500 receiving. That is something that has never been done at Clemson. He can be a first-team All-American and a Heisman candidate.”