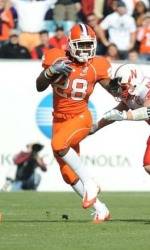 Clemson, SC — Clemson running back James Davis was one of 10 semifinalists in 2006.

Spiller was a first-team All-ACC kick returner and second-team All-ACC running back last year when he had 1065 yards from scrimmage. He led the ACC in all-purpose running with 1770 yards and needs just 921 all-purpose yards this year to become the ACC’s career leader. He is already the Clemson career record holder in that area with 4908.

Spiller was one of six players from the ACC on the list. He is joined by Joanthan Dwyer of Georgia Tech, Shaun Draughn of North Carolina, Jamelle Eugene of NC State, Darren Evans of Virginia Tech, and Da’Rel Scott of Maryland.

Spiller will be able to see his competition from close range during the year as five players on the list will play against Clemson. In addition to games against Georgia Tech (Dwyer), Maryland (Scott) and NC State (Eugene), Clemson will face Joseph Turner of TCU and Phillip Tanner of Middle Tennessee, two more players on the Doak Walker preseason candidates list. Three of those opponents face Clemson within the first four games of the season.

The Guaranty Bank SMU Athletic Forum Board of Directors will select the semifinalists on November 11, and the Doak Walker Award National Selection Committee will cast votes to determine the finalists, who will be announced on November 23. The committee will cast a second vote beginning on November 30 to determine the recipient. The National Selection Committee consists of former NFL All-Pro and college All-America running backs, media members and selected special representatives.

The recipient of the 2009 Doak Walker Award will be announced live on ESPN on The Home Depot ESPNU College Football Awards on Thursday, December 10. The Doak Walker Award Presentation Banquet will be held at the Hilton Anatole Hotel in Dallas, Texas, on Friday, February 19, 2010.

The award, in its 20th year, is named for SMU’s three-time All-America running back Doak Walker. It is the only major collegiate award that requires all candidates to be in good academic standing and on schedule to graduate within one year of other students of the same classification.