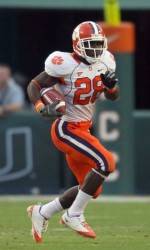 Clemson, SC–Clemson running back C.J. Spiller has been named National Offensive Player of the Week by the Walter Camp Foundation for his performance at Miami (FL).

Spiller received the honor for his performance in Clemson’s 40-37 overtime victory at eight-ranked Miami (FL) on Saturday. Spiller had a Clemson record 310 all-purpose yards, as he had 125 on three kickoff returns, 104 yards on six receptions and 81 yards on 14 rushing attempts. He scored on a 90-yard kickoff return and a 56-yard pass from quarterback Kyle Parker.

His 90-yard kickoff return at Miami was the sixth of his Clemson career, an ACC record, and it was his seventh total kick return for a score as a Tiger. That gave him the ACC record for overall kick returns for scores. He and Steve Suiter of Maryland had six apiece entering Saturday’s game.

In addition to his Walter Camp Award this week, Spiller was also named the National Kickoff Returner of the Week by College Football Performances Awards. It was the second time this year he had been honored by that website.