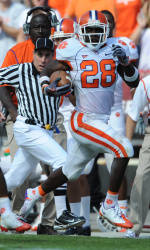 Clemson, SC – Clemson senior C.J. Spiller has been named the National kickoff returner of the week by collegefootballperformance.com. Spiller returned a kickoff 92 yards for a score in the second half of Clemson’s 24-21 loss to Maryland last Saturday. It was quite a return considering a teammate stepped on his left shoe at the 30 yard line, forcing him to run the remaining 70 yards with just one shoe.

It is the second time Spiller has been honored by the website this year. He was the national punt returner of the week by collegefootballperformance.com for the Boston College game this year when he had a 77-yard return for a score.