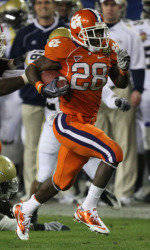 CLEMSON, SC – Clemson running back and kick returner C.J. Spiller was named a first -team All-American all-purpose player by the Associated Press on Tuesday. It completed a sweep of first-team honors for Spiller, who was also named to the Sporting News, Rivals.com, and Scout.com teams Tuesday.

A finalist for the Doak Walker Award, Spiller had 233 yards rushing in 20 attempts and scored a career high four touchdowns in the ACC Championship game against Georgia Tech on December 5. He now has 1,145 rushing yards this year and 445 receiving yards. He has 50 career touchdowns and needs just one to become Clemson’s career leader. He finished sixth in the voting for the Heisman Trophy, the highest finish for an ACC player since 2000 and tied for the highest finish by a Clemson player.

This year he has accounted for a touchdown five different ways, 11 rushing, four receiving, four on kickoff returns, one on a punt return and one by throwing a touchdown pass. He has already established an NCAA record for kickoff returns for touchdowns in a career with seven. He has 7416 all-purpose yards for his career, third best in NCAA history. This season he has 2508 all-purpose yards, an ACC record.