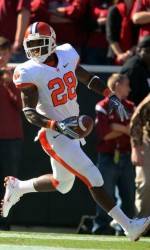 CLEMSON, SC – Clemson senior running back C.J. Spiller has been named a first-team All-American by the American Football Coaches Association. Spiller is one of just two ACC players on the team. The other is Georgia Tech defensive end Derrick Morgan, who will face Spiller and the Tigers in the ACC Championship game on Saturday in Tampa, FL.

Spiller was named the ACC Player of the Year on Wednesday, the first Tiger to receive that honor since Michael Dean Perry in 1987. He ranks fourth in the nation in all-purpose yards with 184 yards per game. He is the only player in the nation to score at least one touchdown in every game this year and has 16 overall, just two off the Clemson season record.

This year he has accounted for a touchdown five different ways, seven rushing, four receiving, four on kickoff returns, one on a punt return and one by throwing a touchdown pass.