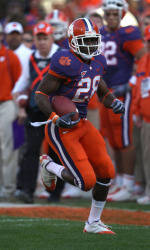 CLEMSON, SC – Clemson running back C.J. Spiller has been named a finalist for the 2009 Doak Walker Award. The award is presented each season to the top running back in the nation. Spiller is joined among by Mark Ingram of Alabama and Toby Gerhart of Stanford.