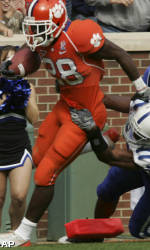 Spiller continued his electrifying play in the season’s second half for the Tigers (5-5, 3-4 Atlantic Coast Conference). He accounted for 242 yards two weeks ago in Clemson’s 27-21 win at Boston College, its first under interim coach Dabo Swinney.

This time, it was Duke which couldn’t contain Clemson’s “Lightning.”

Spiller broke around the right side for a 24-yard touchdown run to start the Tigers’ scoring. It looked like he had wriggled free of several Blue Devils for a second-quarter TD, but a review ruled him down at the 1. James Davis finished the drive off a play later to put Clemson ahead 17-0.

Spiller was at it again when the Tigers got the ball after halftime, catching Cullen Harper’s pass in stride and outrunning everyone for his long TD play.

It was Spiller’s 12th career touchdown play of 50 yards or better, tops in Clemson history. He finished with 74 yards rushing and seven catches for 108 yards, a Clemson single-game record for a running back.

For a while, the Homecoming crowd of 75,000 was reminded by the dominating performance how the Tigers’ season was supposed to play out. Reality, though, is much more sobering — the ACC favorites at the season’s start must sweep their final two games simply to qualify for a bowl.

Duke’s postseason chances also took a big hit. The Blue Devils (4-6, 1-5) began the season 3-1 under first-year coach David Cutcliffe. But they’ve lost six of their past seven and have to beat Virginia Tech and North Carolina for a chance at their first bowl since 1994.

This was supposed to be Duke’s best chance in decades to end its 0-for-Death Valley days against Clemson.

Cutcliffe had brought the Blue Devils offensive life in September, while QB Thaddeus Lewis led the ACC in TD throws and passing yards per game.

Lewis had Duke fans thinking of former standout Ben Bennett, who was a Blue Devils freshman in 1980 — the last time they beat Clemson at Memorial Stadium.

Their hopes, though, lasted two series. Lewis was hit hard on a wayward throw and came up hobbling. He was replaced a series later by Zack Asack and did not return.

The only drama left in the final quarter was whether the Blue Devils would go scoreless for the second time in six games. But Asack found standout receiver Eron Riley for a 28-yard touchdown with 6:21 left. It was Riley’s first TD since Sept. 27 against Virginia.

Clemson’s victory gave a boost to Swinney’s chances of keeping his job past November. The Tigers improved to 2-2 since Tommy Bowden walked away last month. Recently, Swinney’s been questioned about his status, all against the backdrop of athletic director Terry Don Phillips contacting potential replacements like former Oakland Raiders coach Lane Kiffin and defensive coordinators Brent Venables of Oklahoma and Bud Foster of Virginia Tech.

A few more performances like this out of Spiller, and Swinney could have a lot less to worry about.