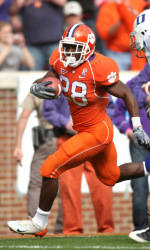 Clemson running back C.J. Spiller was named the Atlantic Coast Conference Offensive Back of the Week for the games of November 13 and 15, 2008. The junior from Lake Butler, FL earns the conference weekly honor for the second time in three weeks.

Spiller established a Clemson record for reception yardage by a Tiger running back in the team’s victory over Duke on Saturday. He had seven receptions for 108 yards, breaking the record held by himself (105 vs. BC two weeks ago), and Ray Mathews, who had 105 receiving yards against Mississippi State in 1948.

Spiller also had 10 rushes for 71 yards and two punt returns for 22 yards. That gave him 19 touches for 201 all-purpose yards. His seven pass receptions also tied a Clemson record for a running back. His 83-yard reception was the longest in Clemson history by a running back (breaking his own record of 82 yards against Boston College in 2006), and it was the fourth longest scoring pass in Clemson history overall.