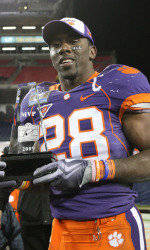 Spiller Expected to be First Round Pick Thursday Night

Clemson, SC – Former Clemson running back C.J. Spiller is expected to be selected in the first round of the NFL Draft on Thursday night. The NFL Draft will be held at Radio City Music Hall in New York City and will be televised by ESPN and the NFL Network.

Eighteen of 19 mock drafts by national media (see below) have Spiller going within the top 15 picks on Thursday. Todd McShay of ESPN, Clark Judge of CBS Sportsline and NBC Sports all have Spiller going to Seattle with the sixth selection.