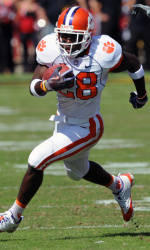 It is difficult to quantify the all-around accomplishments of Clemson running back C.J. Spiller this year and over his career. He became the ACC’s career leader at Maryland when he had 176 all-purpose yards and now has 5941 for his career. He needs just 59 to become the first ACC player in history with 6000 all-purpose yards. He is on pace to reach the 7,000-yard mark by the end of the season, something only three previous FBS players have accomplished.

Spiller’s impact on the game can be compared with some previous Heisman winners, or near Heisman winners who handled the ball as all-purpose players. Below is a comparison of season and career stats for Spiller, Tim Brown (Notre Dame 1984-87), Rocket Ismail (Notre Dame 1988-90), Desmond Howard (Michigan 1989-91) and Reggie Bush (Southern California, 2003-05).

Spiller has 16 touchdowns of 50 yards or more in his career, including four already this year. Ismail had 13, Reggie Bush had 13, and Tim Brown had nine. Howard’s career total unavailable at this time.

Spiller already has three kick returns for touchdowns this year, two on kickoffs and one on a punt. All have been at least 77 yards in length. He has had a play of at least 60 yards in each game so far this year.