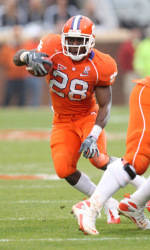 Clemson, SC — Clemson running back Thomas Austin are both ranked as the best juniors at their respective positions by Mel Kiper of ESPN.com. Kiper issued his top juniors eligible for the 2010 NFL draft this week and has the Clemson running back and blocker combination at the head of the class by position.

Spiller is listed first among the running backs who will be returning for their senior seasons. James Sparks of Buffalo is second, ,followed by LeGarrette Blount of Oregon, Charles Scott of LSU and Chris Brown of Oklahoma.

Austin is ranked first among the centers eligible for the 2010 NFL draft and is followed by Josh McNeil of Tennessee, Matt Tennant of Boston College, Jim Cordle of Ohio State and Erik Cook of New Mexico.

Spiller was named first-team All-ACC as a return specialist and second team as a running back for the 2008 season when he gained 1770 all-purpose yards, best in the ACC. He finished the year with 629 yards rushing and 436 receiving, the only ACC player with at least 600 yards rushing and 400 yards receiving last year.

Spiller needs just 921 all-purpose yards to become the ACC’s career leader. He already has the Clemson record after just three years with 4906. The native of Lake Butler, FL who will compete for the Clemson track team at the ACC Championships this weekend, has scored 30 touchdowns, fifth best in Clemson history. He has 2335 career rushing yards, more than any other active ACC player.

The native of Camden, SC made second-team All-ACC last year as a center and was also a first-team Academic All-ACC selection.