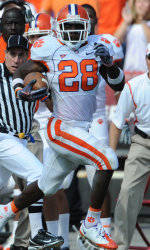 Spiller and Steele Honored by Rivals.com

CLEMSON, SC – Former Clemson All-American Kevin Steele has been named one of the top 10 recruiters of the last decade by the website.

Rivals.com is finishing its 10th year of operation and selected these superlatives in conjunction with that anniversary.

Spiller was named the top kick returner on the Rivals at 10 All-America team, while Ted Ginn, Jr of Ohio State was named the top punt returner. Spiller had four kickoff returns for touchdowns in 2009, his senior year, and had seven kickoff returns for scores for his career, an all-time NCAA record. Overall, he had 7,588 career all-purpose running yards, third in NCAA history.

Steele was selected for his proficiency as a recruiter at Florida State, Alabama and Clemson over the last decade. He was named the top recruiter in the nation in 2005 when he was at Florida State, and has had a positive influence on Clemson’s recruiting classes in recent years.